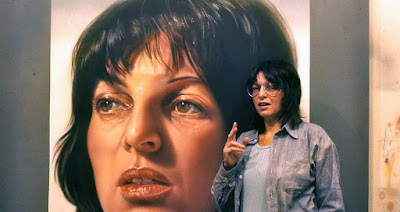 QUEEN OF HEARTS AUDREY FLACK is a portrait of the artist, feminist and teacher in her own words. The film is a look back by the 88 year young artist to explain her life, her art and her world world view.

At a time when most art films are trying to be daring in presentation via animation or clever computer tricks,  QUEEN OF HEARTS is decidedly old school. The film is a combination of interviews  fly on the wall observation mixed with an endless supply of her art. It is a so over whelming that fans will die from overload and non fans will become fans. Clearly director Deborah Shaffer and Rachel Reichman wisely understand that some stories don't need bells and whistles.

You will forgive me not going on about the film, but to be perfectly honest, like the no nonsense approach of the directors, the best thing I can say about QUEEN OF HEARTS is simply just see it. It is a wonderful portrait of a move and shaker in the art world, who is also one hell of a grand lady. You don't need me to recount the tales she so magnificently relates.

Go see QUEEN OF HEARTS and not only be informed but be entertained as well. How often can you say that about a documentary? As such it it is highly recommended.