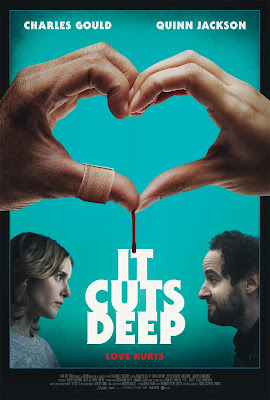 A young couple are  heading toward a serious commitment, however things begin to go wrong when a long ago friend shows up and upsets the dynamic.

This starts off as an uncomfortable black comedy as Sam struggles to come to terms with getting serious with his girlfriend. However things get darker as they go until toward the end the film turns into a full on horror film.  How you react to the turn is going to determine how you react to the film as a whole.

I was amused by the uncomfortable nature of the early part of the film. I’ve been there and had those uneasy conversations that arise when you think the time has come to get even more serious, so I could relate. The trouble is that I’m not certain how I feel  about the way things go dark. I’m not certain it wholly works, or more I’m not certain that they get the shift in tone right.  The end of the film should be pitch black but some of what happens still seemed to be struggling to squeeze a laugh out of it. (if I don’t say how or why it’s simply that I don’t want to spoil anything.)

While not bad, I can recommend the film to horror fans, I can’t say it’s great. Yes you will want to see where it goes but I’m not going to be certain you’ll be happy when you get there.