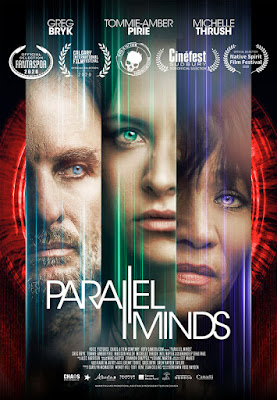 The film is the story of the investigation in to the death lead developer of Red Eye 2, a contact lens that records memories. What looks like a clear cut murder becomes something more with the corporation wanting to cover its tracks and the Red Eye system seeming to have a mind of its own.

While the basic plot is one we've seen before any number of times, everything else dresses the the proceedings up that you really won't care. The cast is excellent with everyone fully invested in what is happening on the screen. Better still is the fact that we get some really good characters who are not cardboard cutouts. Their pasts and presents inform their future, which is important since the film is so rooted in the things that we carry with us in our memories. I love that they don't get over things easily and are badly haunted even to the fade out by what happens. The film is also connected to the indigenous people with Margo having been raised by a woman who was First Nation. It is a choice that adds a great deal to th film since it adds wonderful resonances to what we are seeing.

If there is anything remotely wrong with the film it is a fleeting boardroom scene that appears to have been shot in a storage locker.

This is one to see. Ignore the trailer and just watch PARALLEL MINDS which is a gripping and entertaining thriller

Email ThisBlogThis!Share to TwitterShare to FacebookShare to Pinterest
Labels: horror, science fiction, The Blood in the Snow Canadian Film Festival 2020