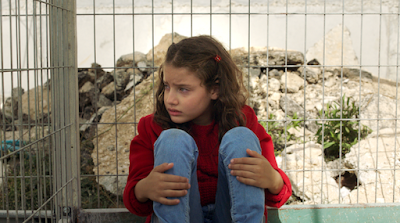 A father and a daughter move out of the Palestinian controlled portion of West Bank and into Israel in order to get a birthday present.

This is a moving look at the inhumane treatment the Palestinians are subjected to on a daily basis. No one should have to live like this. Effectively caged in cities they are abused on a regular basis, being forced to deal with abuse at check points and segregated treatment outside the wall in order to get basic goods and services (there are several recent documentaries on the struggles to get decent medical care across the borders.)

Certain to make you angry the film is recommended.

The Present can be åseen at: The UK Film Festival in November and London Film Week in December  and at the Oscar and Bafta qualifying festivals, Aesthetica Short Film Festival and Leeds International Film Festival