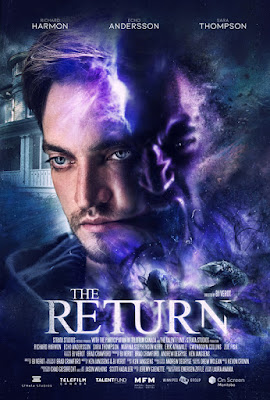 THE RETURN has a young man going home to settle up his father’s estate and discovering an evil entity dwelling in his family home.

This odd mix of science fiction and supernatural  results in an interesting if not wholly successful film. Mixing up traditional haunting film with grabs from Ghostbusters and time travel films it seems to be juggling too many balls to fully work. There is simply too many threads here to have everything come addressed.  Honestly I was engaged from start to finish because I had to know how it came out. However about half way into the film I started to wonder if the filmmakers were going to be able to stick the landing.  I don’t think they did, but they came close and they didn’t crash which says a hell of a lot. I did like the film but I didn’t love it.

Unique enough that it is definitely worth a look

Email ThisBlogThis!Share to TwitterShare to FacebookShare to Pinterest
Labels: horror, science fiction, The Blood in the Snow Canadian Film Festival 2020