A few words on BACK ISSUES: THE HUSTLER MAGAZINE STORY (2014) 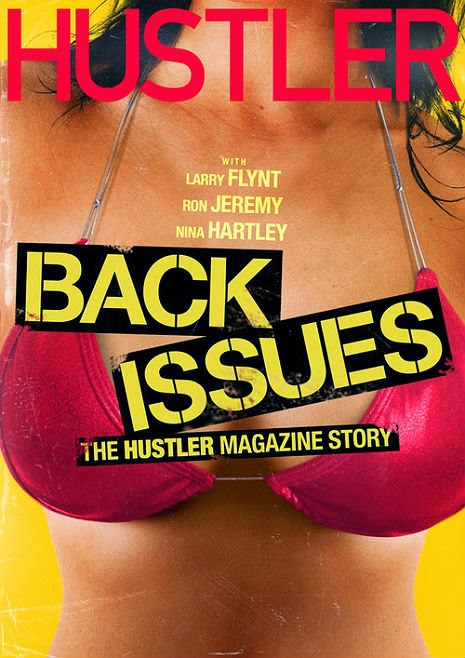 Michael Lee Nirenberg, son of one of Hustler's  original art directors takes a look back at the magazine, the people behind it and the changes the magazine and it's publisher Larry Flynt brought

This is an affectionate look at the smuttier member of the one time big three of adult magazines (the other two being Playboy and Penthouse). Told by the people who were there, Flynt, his brother, the artists, editors, models and friends this is a love letter to back to a time sex was dirty and Hustler sought to make it less so.

This is a hard film to really review. More an overlong puff piece then hard charging expose this is a film filled with some tits, some ass and some information. Its a good film that you can't really knock since it never tries to be more than a friendly look back. In  a weird way it's actually less detailed then many of the serious news articles the magazine has run over the years.  The best way to describe it as more like sitting around at a dinner and listening to a bunch of friends reminisce, knowing there is more to their story but not being allowed to ask some questions. There is nothing wrong with that, but it would like to have had a bit more information, more details and more of a sense of when and what was happening.

If I have to nit pick the film I'm going to have to take the film to task for what it doesn't show. I know the film was restrained by the need to be able to get some sort of release but it's odd that a film about a boundary breaking magazine has to self censor. The most obvious thing the film doesn't show is the pink shots that was set the magazine apart. There is lots of talk but we don't really see anything. I wouldn't have cared but the film makes a point of showing the pubic hair in Penthouse and Playboy. The film also picks and chooses what we see from the various cartoons. Its not always obvious but there are times when people are talking about say, Santa Claus in a cartoon and all we see is part of the image.

Worth a look if you are interested, though you may end up like me wanting to know more.