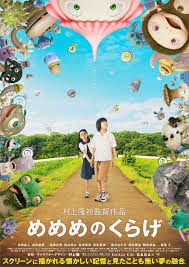 Takashi Murakami's Jelly Fisheyes will either thrill you or disappoint you depending upon what you go into it looking for. If you want to see Murakami's art brought to life then you're golden. However if you're looking for anything beyond an okay kids film then you're going to be seriously disappointed.

The plot has a young boy and his mom moving to a new town. The kid discovers a little creature he decides to hide from everyone. However he soon discovers that all the kids have creatures themselves...and all of them are some how connected to a super secret research facility in the town.

Lets cut to the chase I love the monsters and creatures and visuals of the film they are truly cool.  Unfortunately the rest of the film is a mess. Its a by the numbers kiddie film that you could write in your sleep.You've seen it all before. Granted Murakami handles the cliche deftly, but if it wasn't for his monsters there would be no reason to see this.

If you're six years old or a fan of Murakami's creations give it a shot. If you want more than that look else where.

The film plays tomorrow at Fantasia. For tickets and information go here.
Posted by Steve Kopian at July 19, 2014