Before I start a couple of quick announcements:

For those who haven't heard Jimmy Wang Yu was refused entry into the US so he didn't appear today. Apparently they are working on getting him here later in the year.

I've also posted some pictures from today's intros on our Tumblr site. They can be found here.

I saw three movies today at the festival, all of them quite good. 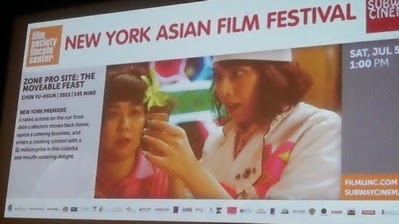 ZONE PRO SITE:THE MOVABLE FEAST has a lousy title. What it means is beyond me. What it is is an utterly charming  film about a young lady who goes on the run when a debt her boyfriend owes endsup dropped in her lap. She's the daughter of a great chef and despite wanting to be a model she ends up cooking in a contest to try and win the money she needs.

Actually the plot is way more complicated than that with dozens of plot threads running backwards and forwards through the story and way way too many characters, not that you'll mind. I mean this is just great time with good people. Its a wonderful wonderful film.  My only complaint is the film is 150 minutes (no it really is since stuff happens during the end credits) and its kind of too much some where about 90 minutes I wanted to take a break. Its like eating the best candy in the world  only to realize you have too much.

Reservations aside this is a great film and will become a favorite of many. I think Eden in particular will fall for it. Track this film down.

Between the films I talked to various people. I talked a lot to Christina Winter from Austin who tried to get me to go to Fantastic Fest. We compared lots of notes. I'm sure I'll be running into her again since she literally has tickets for almost the rest of the fest. And congrats on winning a T-Shirt and poster 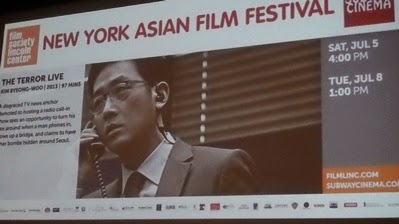 The second movie was TERROR LIVE.

Before the film NYAFF staffer took a call from a bomber who was insisting that he give stuff away lest he blow up a bridge. It may have been in poor taste but considering the film's subject matter it was...a blast.

This thriller concerns a terrorist who calls a radio talk show host (Ha Jung-woo) to say he has a bomb on a bridge. When the host does a "yea right, go a head set it off" he does setting off a series of events that plays out in ways he never expects-for example he ends up with a bomb on himself.

A claustrophobic thriller, we never leave the host and he pretty much never leaves his studio. This is a taut little confection that ends up as black as night.  Its a nasty ugly portrait of Korean society and what it takes to get ahead that says horrible things about journalism (they pay the terrorist to stay on the line). I couldn't look away, nor run to the men's room lest I miss anything. Even if the film goes off the rails about 75 minutes in it still remains gripping simply because you have to see where its going.

If you can go Tuesday do so since it's a killer little thriller that surprised the hell out of me.

Old home week continued between the films as Chocko, Mr C and Mondocurry showed up for ONE ARMED SWORDSMAN. Actually the treat was Mondo's son Nathan who was making his first trip to the festival.  I don't know what to say but he's a cool guy and has promised to write a piece up about the film and his impressions of the festival. 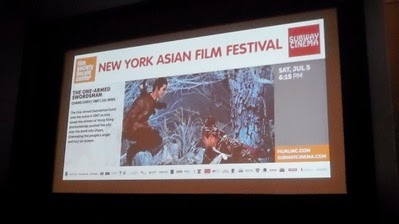 Before the film Grady came out and did a long intro. It was utterly brilliant. It was a long discussion of the film, from it's creation as a film that wasn't supposed to make any money, to its game changing of all Hong Kong film, to Hong Kong history at the time it was made (there was prolonged protests and riots going on) on to the way it catapulted Jimmy Wang Yu to stardom.  I want Grady to do a TV series on the history of Asian film. the man is freaking encyclopedia and one hell of a talker. The world is a poorer place for not having him telling them about film.

Between James's wonderfully wacky intros and Grady's history lessons there simply is no film festival that is more fun and more informative than NYAFF.

As for ONE ARMED SWORDSMAN, my original review is here. As for seeing it on the big screen- it was a blast- more so because I had my friends on either side of me. I love seeing films with the Unseen crew, there is few things better. Also a complete joy was listening to Nathan react to his first NYAFF experience and his first big screen Shaw Brothers film. I could tell he was loving it during the film from his laughter and reactions, not to mention the big smile on his face when it was done.

No, Mondo you're not in trouble you did good.

After the film the Unseen crew left the theater and headed off into the night, I to my subway home and the four musketeers to a Chinese dinner.

That's is for me for tonight. I maybe getting up early for breakfast with my dad before I head back in for two more films.

As for you, dear readers, keep reading, we have multiple reports from here on in so by the end you should have heard about abll but a small handful of NYAFF films.
Posted by Steve Kopian at July 06, 2014