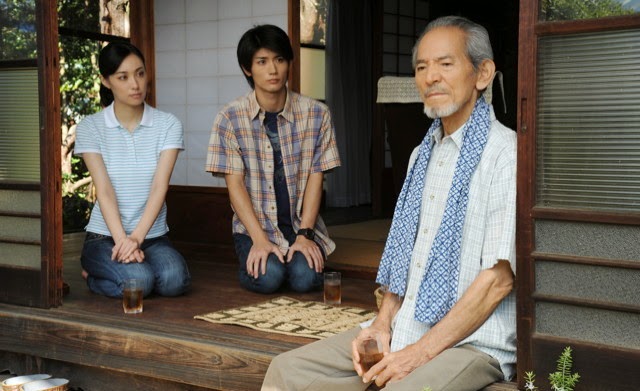 I read this film created a great deal of controversy in Japan for its politics. I'm not sure why, except if it's because the right wants to return to the death cult days that lead to the Kamikaze coming into existence. For me this is a wonderful look back at one man trying to just get home to the one's he love.

The plot of the film has a young woman and her brother trying to run down the story of their real grandfather. It seems that the man they thought was their biological grandfather was actually their grandmother's second husband. While they are initially met with stories of his cowardice, the stories soon begin to change and we realize that what many thought was cowardice was something else entirely.

I am not ashamed to say this film moved me to tears. Yea its a hokey melodrama, yea its a tad cliche, but the sentiment expressed that the waste of life in war is tragic-more so with the use of Kamikaze is deeply moving.

For me the question of the Kamikaze has always haunted me. As with suicide bombers who are referenced in the film, what do you get really when you throw the best and brightest into the grave needlessly? If you kill off today what will that make tomorrow? As our hero asks at what point what will Japan be in the future? I don't know. The central puzzle of why would a man who so desperately wanted to get home would join the Kamikaze is one worth pondering, especially in light of the answer it throws up.

For me this was an emotional kick in the ass.  Yea the visuals and war scenes are impressive, but its the story of a hero- an eternal one- that will haunt you and maybe just maybe make you a tad misty.

One of the real surprises of the New York Asian Film Festival.