Today may or may not have been my last day at Japan Cuts. As days go, it was a nice day in the city not too hot nor too crazy. I got to talk to several good friends though I had to bail early on the Neko Party because the screening and Q&A went too late and endangered a reasonable train home (sorry Mr Powers)

The big do today was that Kazuki Kitamura was going to be on hand for three of his films and to get the CUT ABOVE award before NEKO SAMURAI. I've posted lots of pictures on our Tumblr page and they can be found here.

Both screenings were sold out and a little crazy. 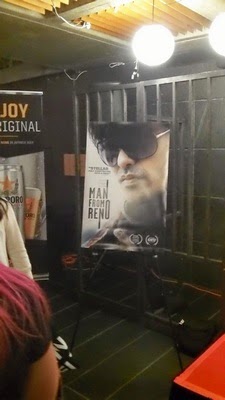 First up was MAN FROM RENO which has been winning awards allover the place.

Dave Boyle's riff on neo noir concerns a mystery writer from Japan who unexpectedly leaves her book tour to fly to San Francisco nominally to see friends, but it soon becomes clear she's considering checking out permanently. Her life gets thrown a curve ball when she meets a Japanese man with whom she spends a passionate night. He's gone in the morning leaving her in a tizzy and in a bit of trouble. At the same time we follow the story of a small town sheriff who runs over a man in the fog and ends up on a course that will connect with our heroine.

A mostly solid little mystery and a very good film, has me scratching my head with all of the laurels it's collecting. Its a good little thriller that has some nice twists on what you expect from a mystery such as this but it's not that great. I had that feeling even before one thing that happens that makes no logical sense except in the director and writers mind. This is also one of those movies that goes on three steps too long since the story is effectively over at a certain point.

I would love to explain what I meant but I don't want to ruin the film when you see it- and you will want to see it.

The Q&A was interesting with director Boyle talking about how he put the film together and used Kickstarter.  I do have to applaud the woman who asked about the point that bothered me and he said that he did it that way because he wanted to. He knew it didn't make sense in the real world but he did it anyway. I suspect from the way he answered the question the point  bothered a lot of other people since the answer seemed well rehearsed. (And no it doesn't make sense I explained why to some people between the films and they agreed it really doesn't make sense at all in an otherwise realistic film)

Yes the point really annoys the hell out of me. And no it doesn't ruin the film for me since it's effectively over before it. 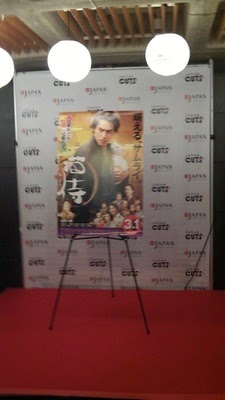 Before NEKO SAMURAI Kitamura was given his award and he spoke eloquently. I don't remember one word that he said, I just remember it was pretty cool.

NEKO SAMURAI was not as Alec hoped the best film ever,it was however quite enjoyable. The film is the story of a disgraced samurai  who is looking for a job. He is paid by a family of dog lovers to kill the cat belonging to their enemies. He is, however, unable to do so so he fakes killing the cat and carries it off, never intending to fall in love with it.  What happens after that is the film and it's utterly charming.

Is the film great? Oh hell no. I have no idea why it sold out in about an hour of going on sale, though the fact that a couple of rows plus were reserved may have to do with it, though I guess New Yorkers are cat lovers, or they know the TV show it's based on.

Its a good film, but did everyone need to feel bad for missing it? Oh hell no- this will play fine on TV.

After the film Kitamura did a Q&A in which he covered his varied career, working with Takashi Miike, Quentin Tarantino (both of which geeked out at meeting the other); the sad fact that the Japanese film industry chases awards, surefire hits  and has no creativity(many films are TV show based); and how he never planned to be an actor. It was a great talk and I'd like to see it again (if you find it on line send me a link)

After the film there was a Neko party. I popped in but because the last film went so late I was in danger of potentially missing the last reasonable train home. I wandered around, said some goodbyes and headed off.

It was good evening capped off by a security guard  calling after Alec and myself to report that someone had turned in Alec's wallet...which he didn't know was missing. Everything was there which says a great deal about the great people who go to Japan Cuts.

Alec and I then walked and talked before parting in Times Square he to go up down, me to go down.

And now time for sleep since I don't know what tomorrow is going to bring.
Posted by Steve Kopian at July 20, 2014