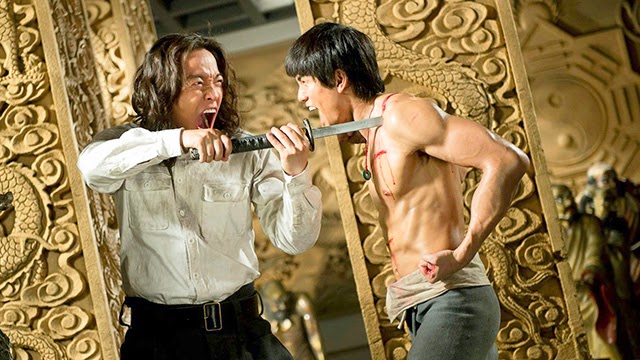 Form over substance action film set in 1930's Shanghai. What I mean by that is this is not a film you'll remember for the plot- just the action.

Philip Ng plays a newly arrived guy with superhero like strength.  He ends up battling one of the heads of the gangs and holds his own and then some with in the allotted time. They then become friends. However this raises the ire of the remaining bosses (especially since a shipment of opium was destroyed in their battle). They plot revenge, leaving a ton of bodies. However they failed to kill Ng so when he finds they've taken the girl he's in love with he wades into their number to get revenge.

There's more to it then that, including Sammo Hung, so don't worry I haven't spoiled anything, besides as I said this is all about the action

The fights were all choreographed by Yuen Woo Ping  and Yuen Cheung-Yan who amp everything up with wires, CGI and slo motion. It all looks kick ass and ugly. Heads are broken. If the fighting isn't really realistic, it doesn't matter since its simply just a truly wonderful violent ballet

And as long as we have the spectacle of fighting or an occasional set piece (the musical number is quite good) the film is wonderful. The problem is the film has exposition sequences and dialog and it's not up to the fighting. Actually to be quite honest its dull. We've seen this sort of story dozens of time before. Its the sort of thing that will make you wish someone would start fighting to liven things up.

Okay it's not quite that bad, however the fighting is that good, and it so outshines the talking that when the final half hour comes and it becomes all fighting you'll be delirious.

I don't hate it, but I wish I had seen this in a theater with a bunch of action fans instead of in my living room on my import DVD.

If you love action give it a go, otherwise take a pass.

The film plays this afternoon and on August 4th at Fantasia. For tickets and more information go to the film's festival web page.
Posted by Steve Kopian at July 26, 2014