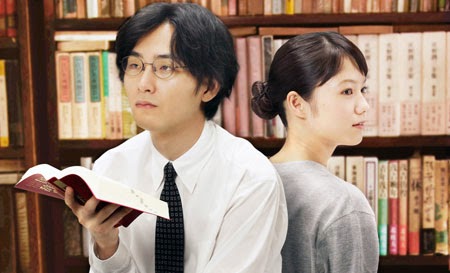 With this year's New York Asian Film Festival/Japan Cuts there are a couple of films that we've seen, and which because of time issues we can't get a full length review up  before the festival screenings. In order to give you some word before the film screens I'm going to run a mini review so you can make up you're own mind

Who would have thought that a film about the creation of a dictionary could be so wonderful, but it is. The Great Passage is a an award winning film that rightly took home it’s boat load of awards. Its also A film that I plan on sharing with people for years to come.

The film is primarily the story of  Majime Mitsuya a bookish, horribly shy young man working at a publishing house in sales. Being as painfully shy as he is he is terrible salesman however the editor of the dictionary sees just the man he needs in him and pulls him into the project. Over thenext 15 years we watch as the dictionary is put together and the team comes together and Majime grows, opens up and even finds love.

Charming, wonderful and moving doesn’t even begin to describe it. I loved this film. Its magical and wonderful and god damn it I lived chunks of this film, with a scene involving a love letter echoing a bit of my life a tad too closely. Clearly I’m not the only one who’s been a love struck nebbish.

Go see this film when it plays Saturday afternoon.

One of my favorites at NYAFF and Japan Cuts

For tickets and more information go to the Japan Society website.
Posted by Steve Kopian at July 10, 2014