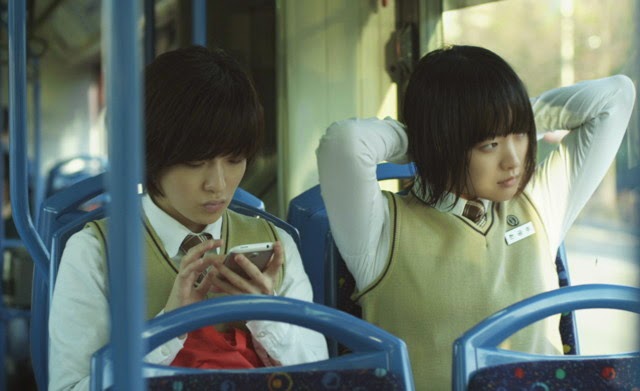 I didn't do anything wrong-Han Gong-ju

Chun Woo-hee gives a killer performance as the title character in a damning indictment of Korean society and it's need to not only find blame for everything (it's rarely the fault of the person who did something). The film is also an indictment of the rampant cruelty that pervades it as well, as those in power pick at the ones less strong.

The film opens with Han Gong-ju being relocated to another school. It seems she was the victim in some terrible act (though it’s really clear it was a sexual assault). The school wants her out of the way to save face, and to be able to keep things under wraps. Moving in with the mother of one of her ex-teachers things are okay for a brief while before things begin to spiral out of control due in part to her silence as to her past making people suspicious and the regular cruel rhythms starting up again.

In writing up the film Hope, a film that premiere's next Tuesday at NYAFF, I talked about the way the festival organizers tend to find a film or two each year that are like having your heart bashed out with a brick. At the time I wrote the review (which runs Monday) I hadn't seen this film so I referred to that as the one film that was soul crushing. I was wrong this film is another one, though this one ends less hopefully than Hope (though the director said the potentially ambiguous ending is actually up beat). Your heart will break and tears will flow as the result of one high schooler's stoic attempt to just rise above it all and get on with it. Sadly sometimes life just refuses to cut anyone a break and there are times when Gong-ju doesn't catch one except fleetingly. The sins visited upon her are constantly brought up, despite her drive to move on and get past the darkness.

I'm going to be honest and say this film kind of overwhelmed me. The tone of the film, which is matter of fact, makes what transpires seem somehow more painful since it seems all seems as “this is just life”. While I know nothing of Korean society from personal experience, the portrait of the one Han Gong-ju paints is not a happy one. Everyone is pained and seemingly willing to blame someone for their misfortunes, that saving face is all and they accept that some people will buy their way out of trouble.

I'm not sure if this is a good film, or a great film good. I have a little bit of a reservation toward the plot which is a little too literary in its darkness and lack of hope for me to full buy into it (as I said the ending is, according to the director, hopeful but to me the hope seems to be a kind of false note coming via a tagged on final shot). Of course the reaction may very well be a distancing mechanism on my part since there was a point where I kind of shut off and let the film wash over me until the end. I don’t like dark, and for me to accept it a film has to knock down certain guards I tend to throw up.

On the other hand the film is affecting though when you're done you may want to be like me and play in traffic. If a great film provokes a reaction this is it. (and I should have seen this a second time before reviewing it but I just don't want to go back to the film’s head space for a while.)

You'll forgive me for not mentioning Chun Woo-hee's performance again until now but all I can say its stellar and perfect and deserving of every award under the sun. She is amazing and you will bleed for her.

Should you see this? If you want to be moved yes.But be warned it will take you to a sad place of human existence and of the real cruelty of human behavior. Sadly its good films like this that depict the cruelty of Korean society that make me never want to go there

The film's only screening at the New York Asian Film Festival was this past Monday, however it plays for the next week at the Museum of Modern Art in New York (details can be found here)
Posted by Steve Kopian at July 02, 2014