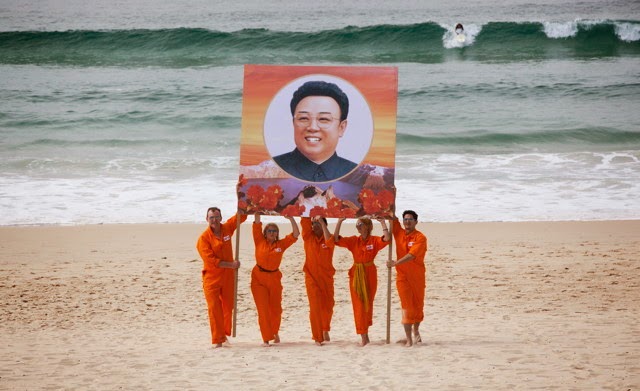 Anna Broinowski's wild mix of documentary and satire  is something that is either going to thrill you and have you doubled over with laughter or leave you shaking your head.

The film follows Ms Broinowski as she attempts to fight the drilling of seam gas in and around her home town near Sydney Australia. Deciding the best thing to do is make a documentary about the subject she found that no one involved with the project would talk to her. In desperation she decided to do what any rational person would do and that is make a film based on the cinematic ideas of North Korean leader Kim Jong-il. And the best way to really learn them would be to fly to North Korea and speak with the North Korean filmmakers.

This was one of the films I most wanted to see at the New York Asian Festival this year. This was the film that I was going to base my schedule for the films today on. As much as I wanted to see the films by Sono and Miike at the Japan Society, I knew I was going to get one shot at seeing this, so I would forgo seeing those films to see this...and then I was able to see this early and all was right with the world. I could have my cake and eat it too.

And then I started watching  Aim High... and my heart sank as I found myself watching one of the biggest disappointments of any New York Asian Film Festival. I really dislike this film a great deal.

Admittedly part of the problem with this film is that I'm approaching it from a different perspective. You have to realize that over the last three years I've had several long conversations with NYAFF organizer Rufus de Rham about North Korean cinema. Rufus is an expert and listening to him talk about the films was a revelation. And knowing his desire to see real North Korean films in the festival I was hoping this was going to be a slightly more serious film than it was.

Okay yes, I do know that the idea of making a film using Jong-il's ideas is silly on the face of it, but I at least was hoping there was going to be at least something serious, other than the potential tragedy of drilling gas. Sadly I found nothing.

I suspect that had I found the film funny or clever I would have enjoyed it but the film came off as mocking and stupid. It didn't work for me and I kind of cringed. It was as if they were trying to ape Michael Moore's style and missed the mark.

To be honest I got about half way in to the film before I just started skipping through the screener to the end.

This film just failed to work- it may have aimed high but it blew up on the launching pad as far as I'm concerned.

For more details and tickets for tonight's screening check the website.

ADDENDUM
I never thought to object to the film on humanitarian reasons. Joe Bendel makes a pervasive argument on why the film is morally questionable at his base JB SPINS. Do yourself a favor and read his thoughts.
Posted by Steve Kopian at July 10, 2014