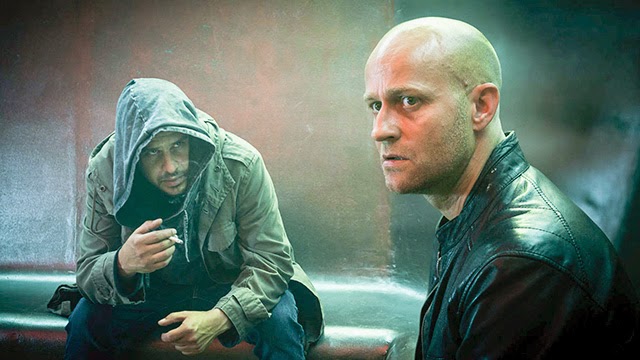 We don't have to end this with a bloodbath

Eric runs a motorbike shop and spends time with his new girlfriend and her daughter.  However some bad looking guys start coming around saying they know him and wanting him to join their less than savory enterprises.  Sensing danger for himself and those around him Eric finds he has to turn to Henry who has some connection to the bad guys, but that may not be a good idea.

Great looking film is something you must see big. Trust me on this this is gorgeous film. However I'm not going to talk about the look or the craft or the performances, all of which are excellent. Instead I want to talk about the thrills and the suspense and the violence,- God damn this film gets your blood flowing.

This is great little film about where the sins of the past can kill not only you but everyone around you. I'm not giving anything away to say that Eric is not who he seems to be, and he is quite capable of taking care of himself...with a deadly ability that is truly frightening. Actually this is a film that manages to make the violence something that amazes and something that truly sickens (in the right way).  You fear what you're going to see next because not only will it probably badly affect some one we care for, but it will also be really unpleasant to watch. I groaned at some of the beatings.

Even before we get to the violence this film cranks up the suspense. The film sets up Eric and his family that we really like them even before anyone bad shows up. We don't want anything to happen, but we know it will because that's the sort of film it is. The question is how bad is it going to get? I think I've answered that.

I really was impressed by this film. Fifteen minutes in and already I'm trying to work out who I want to spring this film on. Films this good have to be shared with as many people as possible. Its also the sort of film you'll want to add to your collection...well maybe not you but most definitely me.

This is a super super film. Its a film that is even better than what I heard about it from the festival circuit.

See this film ASAP. Trust me you'll thank me.

For more details and tickets go to the film's Festival page here
Posted by Steve Kopian at July 31, 2014