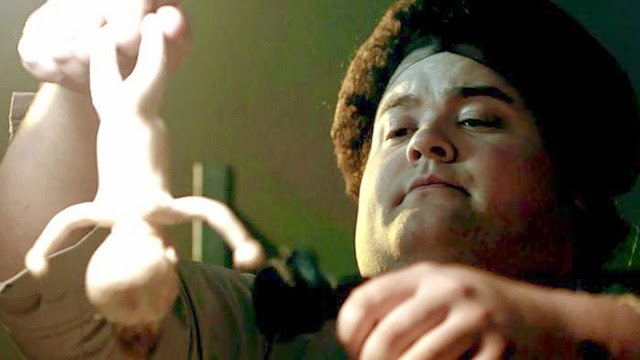 This is a short review because I wasn't going to see this nor review it. I stumbled into seeing it and fell head over heels for it. But since I never intended in reviewing it I never took notes and was simply pulled along. Consider this less a review and more a mash note.

This is a sure to become a cult musical comedy science fiction fantasy  holiday film about Jon, a man working at Patch Industries where toys are made from the babies literally pulled from the cabbage patch. When Jon a worker on the line discovers the truth (that he is one of the toys brainwashed into not remembering) he struggles to flee the factory. But the evil owner of the company has other plans and in order to save his family Jon has to fight.

Brilliantly off kilter fantasy film is one of the great surprises of this years Fantasia and the year. Where did this wonderfully unique film spring from? I don't know but please send more.

Playing like deranged Tim Burton but weirder, mixed with Grimm's fairy tales mixed with Off Broadway and I don't know what, this film is except truly something unique. Seriously I can tell you what it's like and what it riffs and borrows from but it is truly unique.There is nothing quite like this. This is true movie magic.

If you love unique films you must track this film down.

The film has had it's only run at Fantasia but details can be found here.

(And if you want to know how good Julian Richings who plays the villain  is compare his role here with his truly classic performance in EJECTA which plays next week. You will not believe its the same man)
Posted by Steve Kopian at July 23, 2014