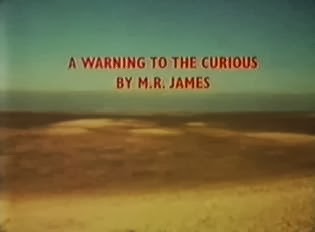 Back in the 1970's the BBC did the most Christmasy thing one can imagine and every year on or damn close to Christmas they ran a ghost story late at night.  From 1971 until 1978 right around midnight the English TV viewers got a moody ghost story. (The series has been sporadically revived over the last decade) Most of the stories were by M R James, a man whose work I have no conscious knowledge out side of the adaptions I've seen.

Warning to the Curious is the story of an amateur archaeologist who comes to a seaside town nominally on holiday. In actuality he is hoping to discover one of  three ancient crowns supposedly buried  in the landscape under the belief that so long as they remain buried the town, and England would never be invaded. Unfortunately for him he discovers the crown and there after is haunted by a supernatural guardian.

If you want shocks and jolts this isn't the sort of story for you. However if you want a creepy little story of slow building unease this is a film for you. This is exactly the sort of low key horror that you don't want to see late at night since there really isn't a release, it just goes on. This is also not a film is you want lots of noise  and dialog because even though there are plenty of dialog scenes, its the silences that you'll remember, The unexpressed terror of shadowy figures haunting you.

This is a creepy little film, it runs only 50 minutes, that, assuming you're willing to give yourself over to it, will send shivers up and down your spine. While it was designed to be seen late at night, those who are open to suggestion may not want to wait until daylight hours to view it.
Posted by Steve Kopian at July 19, 2014