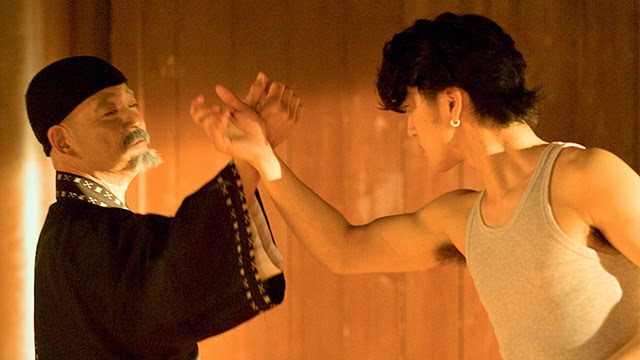 Jen is a young man traveling the world in order to find his own unique dance style . Stopping at Okinowa he becomes a pupil for a Ryukyu dance master who is also a kick ass martial artist. Will Jen be able to blend his dance with martial arts to find his style and save the dojo, and the girl?

That's a rhetorical question, of course he will.

Way better than you think it will be film is a glorious dance/wu xia film mixed with a  Karate Kid like plot to form a film that will make you feel good and put a smile on your face. Yes I'm sure that there have been films like this before, but who the hell cares when this one is so much fun?

That the film works is thanks entirely to the characters and the small moments that fill the film. You like everyone, even, strangely, the bad guys.  You delight in the small moment, say pulling a squirt gun in a bath house. And the music and martial arts/dance  combine in scenes that are just wonderful and not run of the mill. Best of all their lack of perfection add to the charm and make them real.

God damn I loved this film.

I went from "Oh crap they gave me  a screener I have to review this" to emailing friends to say they have to track this down.

As I said it's not perfect but it is quite wonderful on it's own terms.

The film plays later on ttoday at Fantasia. For tickets and more information check the film's festival page here.
Posted by Steve Kopian at July 26, 2014