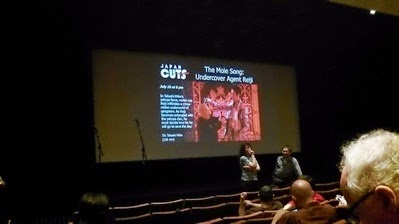 I attended the opening film of this year;'s Japan Cuts The Mole Song Undercover Agent Reiji. As in years past it was co presented by the New York Asian Film Festival.

Tonight at NYAFF it was killer since the festival had three locations running-The Asia Society had almost three hours of Korean shorts (if you went send me a report), the Walter Reade portion closed down with four films today (My spies tell me Aberdeen was awesome and one of the best of NYAFF) and the Japan Society ran Mole Song and Why Don't You Play in Hell. Having seen Play in Hell I only stayed for Mole Song.

Alec Kubas-Meyer was there for the long haul (and he was one of the spies regarding Aberdeen) and it was good to see him in the flesh.

Before the film there was the typical giveaway- though it wasn't typical since it was done by Japan Society volunteers. The new programmer then introduced the film. This was interrupted by James, NYAFF staffer as a Yakuza member looking for humor (See below or for better pictures go to our Tumbler page here) James scored big time yet again and its clear why he is the one they have doing the intros now that Grady is in semi-retirement.

The  film itself is mix of hurt yourself funny comedy and tense crime action mixed together in a manga pot.  Based on a manga the film follows Reiji, a reject cop as he's recruited to go undercover to break a Yakuza gang. He some how manages to survive and thrive in the weird Yakuza world all the while managing to take down some of the bad guys. Think the insanity of Ninja Kids!!! but with an adult sensibility.

Personally I loved the first half with its sense of anything can happen. I'm less in love with the second half which is saddled with a plot that drives toward a conclusion- at least for what maybe a first film in a series.

The humor is broad and silly. Its by no means a serious film, I mean one character is a cat lover and has diamond teeth, another is tattooed like a leopard, another character loves butterflies plus there are musical numbers and other craziness. I laughed to the point of pain a couple of times.

While not Miike's best it is a damn funny film.

After the film I said good bye to Alex and I headed out. The line to get in for Play in Hell was long, as was the standby line.

A short night- but I'll be back tomorrow for both films.

And keep reading we'll have reviews of all but 3 NYAFF films from this weekend up and we'll have all but six of the Japan Cuts titles reviewed over the next ten days.