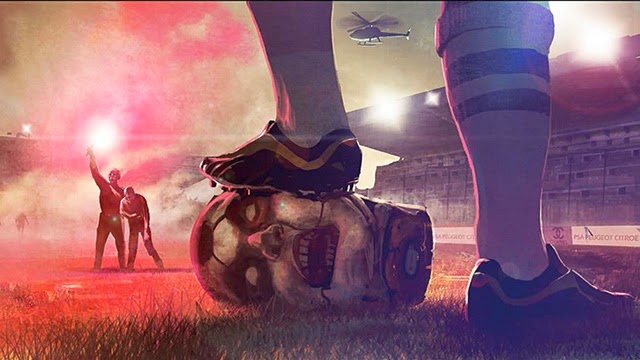 This two part almost two and a half hour zombie soccer film from France is too long.

Things get started when a soccer team goes to a small town for a tournament game. For one of the team members it's a home coming since he left years before to play in Paris, breaking hearts and pissing off his friends.  Meanwhile the small town doctor gets the wrong package by a delivery guy who picks the wrong box when several fall out of the back of his van obliterating the addresses. The doctor gives some of the concoction to one of the small town soccer players and it's all down hill from there.

Wildly over long film is very well done but the sort of thing you're either going to click with or be bored by. I like the film  but it does tend to ramble on, and the fact the first half closes with a ten minute credits sequence that replays the previous hour is a bit much.

To be honest I do like the fact that the film has two directors (Benjamin Rocher, who did the Horde, does the first which is largely set up and Thierry Poiraud, who did Atomik Circus, does the second is zombie soccer apocalypse) but I don't know if the mix of comedy and horror fully works and certainly the Fantasia Fest write up that infers something akin to Slapshot is out of place. The film is humorous but never laugh out loud funny. Even the tension never fully is there with it coming more from whats the next weird/gross twist as opposed to I'm frightened about whats going to happen next.

While not a bad film, it never fully came together for me. This is the sort of film that left me going, "... yes and?" since I don't either why it's banging from pillar to post (except to fill out the long running time)  nor if it was really worth writing up though I have recommended it to several zombie film fans. For me the film just kind of misses.(On the plus side I saw this with my brother the zombie film lover and he liked it)

I know the two hour and twenty minute run time was way too long. My feeling is the result of there being too many bad zombie films giving me the feeling that the undead genre is so over done that unless it's truly great even watching an 80 minute movie is pushing it. This isn't great and it's not good enough to sustain such along run time.

The film plays later today at Fantasia. For more details and tickets go to the Fantasia page for the film.
Posted by Steve Kopian at July 25, 2014