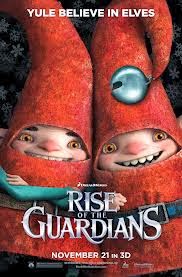 The premise of the film has Jack Frost meeting up and ultimately joining the Guardians of Childhood (Tooth Fairy,Sandman, Santa Claus and the Easter Bunny) They are tasked with protecting children from the evil of Pitch who feeds on fear. Pitch wants to stop children from believing since if kids don't believe in the Guardians then they will lose their power and eventually disappear. If they disappear Pitch will rule over everything.

Great vocal performances by Jude Law as Pitch, Hugh Jackman as the Easter Bunny, Chris Pine as Jack and Alec Baldwin as Santa help to create a bunch of characters that anyone could really believe in. Why can't their be a dark lord? Why couldn't Santa be a warrior? Yes the characters look cool but at the same time the voices sell the characters beyond the look and beyond the script.

Also helping to sell things are all of the small little touches that are in the film. First and foremost are all of the little characters that help the Guardians, the elves, the yeti like creatures, the giant eggs, the fairies, the nightmares, the reindeer. The fact that great care was given over to all of these characters says a great deal about the rest of the film. Actually watch the design of the film watch the levels of detail with in each shot and sequence and you'll realize that the film is truly something special. I mean where most animated films simplify their design RISE increases it making each frame feel like a real place instead of a simple background (The Kung Fu Panda films anyone?)

I know the film didn't do well, or super well at the box office. I know when it came out it went head to head with another family film, but you know what, this maybe a better film, at least from a more adult perspective. I think the reason this film didn't do well is that while the good vs evil plot will work fine for kids, the other layers, the need to believe for example are things which are going to go over a kids head.  I mean are kids really going to understand how important one person believing in you is? I doubt it. I doubt they are going to catch all of the things for moms and dads.

I really like this film a great deal. No it's not a perfect film but it is pretty darn good, and it does have some really cool stuff in it so what more could you ask for?