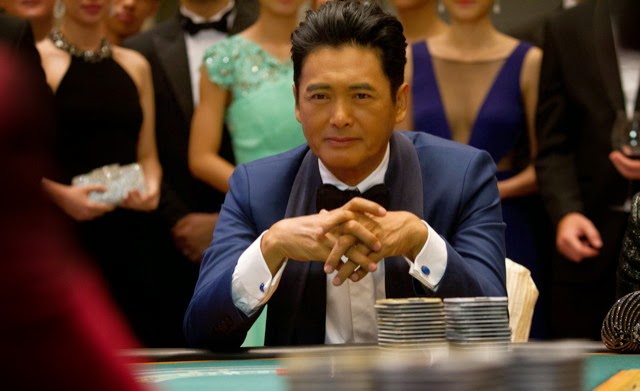 Wong Jing's semi sequel to GOD OF GAMBLERS is both this year's obligatory New York Asian Film Festival Chow Yun Fat film and Wong Jing film. Its a broadly silly movie with singing,  dancing, action, gambling, cards as weapon and low brow jokes, including a running self referential gag about Jing's direction. It co-stars Nicholas Tse and Chapman To as members of a Robin Hood like thieves who plot revenge on a big crime boss. They need their old friend Chow to help to fleece their prey and get revenge for the killing of their brother.

The first thing you need to know was this was released earlier this year during the New Year celebrations. This means the film is not designed to be deep and only to entertain. It means of entertaining is to be very silly. If you don't like large doses of silly mixed into your Chow Yun Fat films give this one a pass. On the other hand if you like silly with a side order of action this maybe for you (This is a comedy first,everything else second)

For me the film is a mixed bag. Its a joy to watch Chow be silly, but at the same time the film rambles all over the place with only a minimum of narrative thrust, more often then not things just happen. Frankly I really have no idea what the plot was other than to take down a certain bad guy. I know the point is the laughs, but at the same time there really is no tension other than during an odd sequence, which is sad since the bad guy really is bad and in another film he would have kicked ass.

Is it funny? Oh yes, but it doesn't add up to a hell of a lot. I got half way in and realized even though I was laughing it was going to be gone from my brain as soon as the end credits finished.

Is it worth seeing? As a rainy day throw your troubles away film, yea, but beyond that...the choice is yours.You have to love Chow being completely goofy and smiling for 89 minutes, if you're good with that go. If you're looking for anything else stay away.

The film play tomorrow at 6 at the Walter Reade. For tickets and more information go here.
Posted by Steve Kopian at July 03, 2014