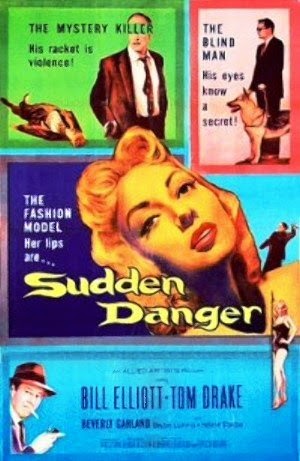 Second of the Bill Elliott crime films that closed out his movie career has his name changing from Andy Flynn in the previous film to Andy Doyle for the remainder of the series. Its a solid program mystery that's definitely worth your time.

The mystery this time around concerns an apparent suicide. A man blinded in an accident five years home returns home to discover that his mother has committed suicide by turning on the gas in the apartment. When Elliot's Doyle begins what he thinks is a routine investigation into the matter he uncovers the possibility that the son may have killed his mother in order to get the money to pay for an operation. As the investigation goes on he begins to uncover information that some one doesn't want revealed.

Good little mystery that presents the Doyle character as a find upstanding sort who will follow the trail of clues and bodies to the bitter end. He's a man who will apologize when wrong and won't stop until he gets his man. While he echoes the Joe Friday just the facts style of Dragnet he is much more human and real since from the get go you get a sense of him being larger than the job and having a sense of humor.

Currently out with the other films in the series from the Warner Archive and worth your time.
---
Apropos of nothing- the Leonard Maltin guide review of this film and the three that follow it are basically exactly the same listing the murder location and then saying that Elliot  plays the same role in 4 other films. The rating for the remaining films are all 1 and a half stars which is completely out of line and makes me wonder if anyone actually saw the films.
Posted by Steve Kopian at July 22, 2014