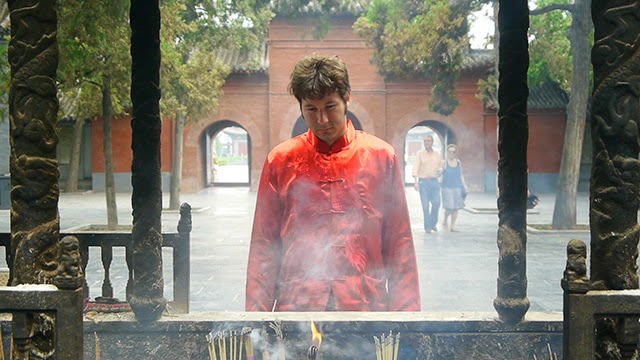 I'm trying to sort out what the hell this film is.

It is really not what it appears to be at the start- a light hearted portrait of Elliot Scott, a Canadian martial arts champion who wants to become the first Canadian action star. He's attempting to do this by making ultra low budget films. As the film starts he's made two and we watch as he tries to put his third, Blood Fight, together. Well it is about that, but at a certain point things go off in a different direction. The change happens once the spot light is thrown on Elliot and his band and as a result this isn't what you think its going to be in the first moments, it becomes something very darker, and very troubling.

This is one weird freaking story. It's so unexpected that I thought the whole thing must be some grand joke.

As things go on you realize that what you thought was going to be a nice look at a guy who makes cheezy martial arts films is really about a guy who is more than a bit off. This is not a film where the shooting went smoothly, things happened and to be perfectly honest I have no idea how or why some people involved with this film allowed the footage to be used since some of it is not flattering. Personalities change, relationships fragment, inner selves are revealed.

I'm intentionally not going to say too much more since you're going to want to get the full smack down this film delivers by not knowing where this goes. Besides, I tried to watch this a second time so I could take better notes and to see early on if I could see the seeds of what happens later, but I could only get so far in before I decided I just didn't want to go there again...at least for a while.

Is it good? If you think any film that provokes a reaction is good then it is. If you think a film that haunts your dreams is good then it's good.Of course it's good, its actually great. Its a film that will have to talking to your friends about for weeks afterward. The bitch of seeing this before most of my friends is that I have no one to talk to about it with. This is film that is full of things to ponder and discuss not the least of which it the drive for fame.

Should you see it- oh hell yea. You'll be talking about this film for weeks.