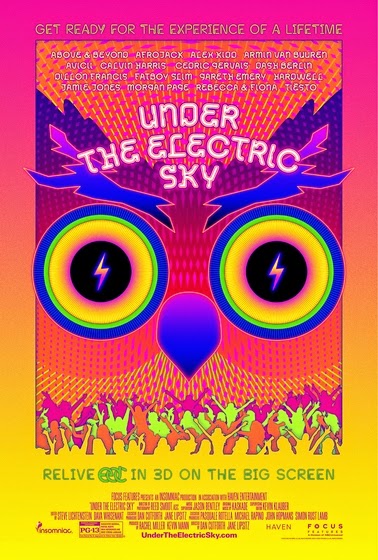 Let me begin by saying something that’s painfully obvious-Under the Electric Sky, about the Electric Daisy Carnival an annual gathering of fans of electronic dance music in Las Vegas, is an 89 minute commercial for the festival. It’s a loving crafted look at the power of the type of music to make people happy that was financed by the festival organizers. This is a film that for 99.99% of its running time only deals with the good things. You’ll forgive me for saying that upfront but it has to be said because if you see the film you have to know that as good as bits of this film is we’re not getting the whole story of the festival or the music culture.

The film follows six people or groups as they make their way to the festival from around the country and the world plus it includes interviews with the festival and organizers. We meet a poly-amorous group who are planning on getting married at the festival, a group of guys from New England who travel in a camper to the festival to honor their recently deceased friend who organized the trip, a couple who met at the festival and now have kids together, a couple in a long distance relationship (he’s in Japan she’s in New York) meeting for the first time in six months, a young man in a wheel chair and Sadie a young woman from a small town who never quite fit in and was bullied to the point of developing anxiety attacks.

To be honest they could have lost half the characters, the poly-amorous group, the guys in the camper, and the long distance couple since they don’t add much. The poly group is just wacky and according to the press notes was included for that reason. The Camper guys are interesting but we never really get enough information to really know them. Actually the real problem is we never get to know much about their dead friend Ferris. Who was he? Why is he so important and what happened to him? The long distance couple is cute and doe eyed lovely but other than looking completely in love with each other and always on the verge of jumping each other there is nothing there.

Actually that the real problem with the film, it is as shallow as the music is said to be my many critics outside the genre. We don’t get to know what really goes into the festival, we don’t get to know about the music, and we don’t see any real sign of the dark side. All notion of drugs and other bad things are pretty much ignored despite news reports of drug arrests and deaths at several festivals recently.

The heart of the film and the reason to take it for being more than a glorified commercial are three of the stories the film tells, the longtime couple, Jose, the young man in a wheel chair and Sadie the girl with the anxiety disorder. In those three stories you have the backbone of a truly great film (that should have been).

With Alli and Matt the long time couple we see the history of EDC. Its this wonderful love story and portrait of these really cool people who have found a wonderful place to be.

Jose’s story is amazing. The film keeps saying the festival is place where people will accept you for who you are and with his story we see it, we watch as everyone gets out of the way as he navigates the crowd and interacts with him as if he’s a person, and we also see, in a bit in the trailer, him lifted up by some guys who just wanted him to see the festival from above. It’s a transcendent moment that we see moves him to tears.

The best story is that of Sdie. Watching her navigate the festival is something amazing. There was this moment where we watch her dancing on the third day that I was brought to tears and the pure joy on her face. Why does the festival matter? To allow people to feel that happy. Oh course that’s not the end of her story and what happens next (which I suspect might have been set up by the filmmakers-though I doubt she knew it was going to happen) is one of my favorite moments on film all year. That’s not in the trailer and I’m not going to tell you what it is.

On a technical level I’m not sure how seeing this not under optimal conditions will affect your reaction. I say this because I saw this at the Dolby Labs screening room with perfect sound and picture. The music was thumping throughout (I was tired from bopping along) and the 3D when it clicked in was wonderful. The 3D seems to have only been in used in about two thirds of the film, with anything at the festival or anything involving computer graphics popping.

If you can see the film under optimal conditions, in a theater with big sound and 3D absolutely- assuming you go in knowing the film is not deep but more a presentation of the joy of the music and being at the festival.

I would also like to say that if you feel yourself to be an outsider you may want to try the film because maybe you’ll find a place to go. I say this as someone who has always felt outside the crowd. Watching the film I was moved at the possibility, and wonder if it’s true of a place that really has near total acceptance. If its like that I want to go too.

The film opened June 27 in Los Angeles . It opens Friday in New York, Chicago, Miami and Dallas and will be opening around the country over the next few weeks. 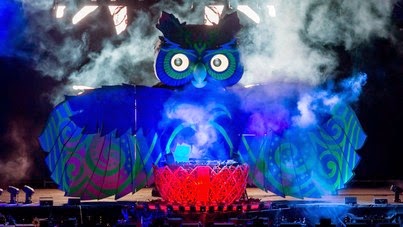