Just missed connections and some delays on the LIRR kept me out late so I'm going to be brief with a wrap up of tonights films. So no chatter about talking to Christine from Austin, Dave from NYAFF or sean from the seat behind me. 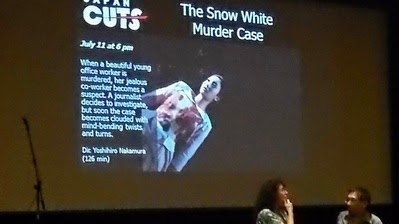 THE SNOW WHITE MURDER CASE  has director Yoshihiro Nakamura back in the Fish Story territory with a story that changes and morphs as each minute of the film passes.

The plot of the film has the charred body of a worker from a company that makes Snow White soap found in a forest. A TV news reporter investigates and the story of what happened and who the suspect is really changes with each person's story. Its the sort of thrill ride that isn't over until the end credits role.

An excellent film about social media, TV News, cyber bullying, interpersonal relationships and ultimately how what we think we know is not the case. This is a film that will require multiple viewings simply because you'll want to see how what you find out at the end plays out in the beginning.

This film is wonderful. And while I will not be as so bold to place it, as one audience member did, above the director's Fish Story and on one of the truly all time great films, I will say I reserve the right to change my mind since the layers in the film require further investigation. 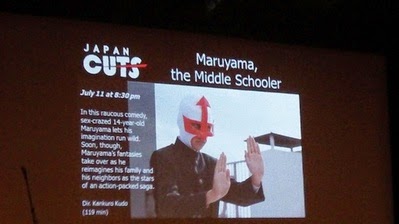 When your fantasies trump reality you'll have found truth

MARUYAMA, THE MIDDLE SCHOOLER is a film that vexes me slightly. Nominally the story of a teenager who wants to lick his own weenie, the film is a much more complex film dealing with life, particularly in one apartment building.

The film follows Maruyama as he goes through life. We watch as numerous story lines play out- don't ask me explain them all because there are so many- though we watch as the young man's flights of fantasy have weird repercussions on his real world. The lines of reality and fantasy crash all through the film as Ik-Joon Yang (star of the film Breathless) plays...well someone that looks like himself. Trust me its crazy.

Though despite some wild twists of fantasy the film really isn't. Its wonderfully anchored in reality and it makes it all feel really real.

The film has one of my favorite lines of all time in it- When we go out together it isn't dementia, it's dating. Its a wonderful feel good moment in the film

And that's the problem. This is a film of moments. This is two hours of wonderful moments and riffs and drifts and fantasies. Its 120 moments very few of which ever really tie up. There are simply too many plot threads and characters. Don't get me wrong none of it is bad- it's not rather its a film where I could put most of the film's pieces on my best of the year list but I could never put the whole film. Reservations aside the film  really is a must see.

And with that I'm heading off to bed. There are multiple reviews today and tomorrow already scheduled and I have two films Sunday to see.  NYAFF maybe be winding down but Japan Cuts has another nine days and we'll be reporting on the films all week long.
Posted by Steve Kopian at July 12, 2014