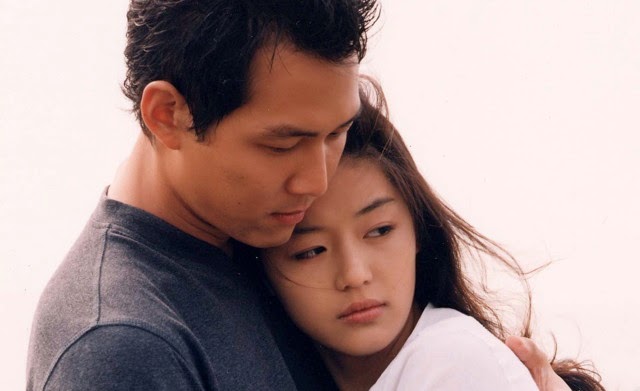 A Korean film with an Italian title...

This was remade as Lake House with Sandra Bullock.

The plot of this movie goes something like this.... A young woman leaving a house called Il Mare because it stands on a pier in the sea leaves a note for the next occupant of the house. The idea is to greet the next occupant and to ask them to send her any mail addressed to her since she expecting some important letters (from her boyfriend who's learning animation in America). The letter is picked up by a young man who is an aspiring architect but who works building bridges to pay the rent. He has just moved into Il Mare...as its first tenant...two years before the girl's letter was sent. What transpires is a conversation in letters as boy and girl exchange letters across time.

This is a beautiful to look at (I love Il Mare the house) and to listen to movie (I'm going to have to track down the soundtrack). In a way this plays like a time traveling version of 84 Charring Cross Road with much of the story told simply through the letters. In some ways its a story of two isolated people connecting through time, even though there is no way they should be able to. I think that one review of the film I read was right in away in that this film is a weird sort of take on the Instant Messaging/texting/tweetinging culture as well as anyone who spends too much time on the computer and so isolates themselves from human contact.(This also has echoes of Voices of a Distant Star) This is a very nice little romance about two people who at first think their connection is a joke and then find that they are somehow becoming friends. For the most part it manages to keep you from thinking about the problems that "time travel" stories usually engender. Basically if you give yourself over to it you'll have yourself a good time.

This isn't to say that there aren't problems, there are. As I said the film deals with people who aren't connecting with each other and a good portion of the film is taken up by the two leads moving around not connecting to people. Yes they talk to people (The girls best friend runs a manga store- and she does voice acting) but mostly they are are off in their own little worlds. It gets rather tiring since it feels more like a play than a movie at times, the movie in the wrong frame of mind (which I was in) will make the movie seem much longer than its 95 minutes.(Worse I thought I would jump a head...bad mistake since I had to go back to make sense of what I saw)

Still its a nice romance that moved me (I'm not afraid to say I had a tear in my eye). Definitely worth seeing if you're so inclined....and it is sooooooooo much better than Lake House.
Posted by Steve Kopian at July 06, 2014