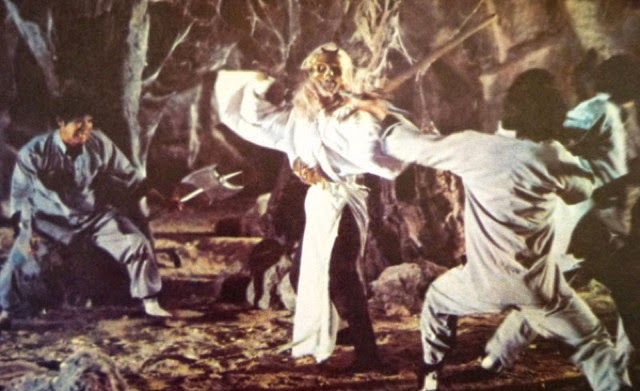 This is the piece I did way back in September of 2010. I was just about to write the film up when I realized that I had written it up under one of it's many titles 7 Brothers Meet Dracula. Whatever the title this is a must see and if you can get to Lincoln Center tomorrow you should make the effort to see this on a big screen.

Excellent, if occasionally awkward, mixing of the Hammer Horror films with the Shaw Brothers martial arts films. The plot has Dracula going to China and taking over the body of a Chinese warlord. He then sets up a zombie army to do his bidding. Professor Van Helsing is brought in to help fight his old enemy. He joins forces with a family of martial artists and that's when the fun begins.

I know it sounds silly, and quite frankly it is. At the same time it's also a real fine adventure film (it's not really scary). The performances are good and the action almost nonstop. It's a mixing of two genres that shouldn't work together but somehow do.

The film was originally cut up, retitled and rearranged for American release. If you've only see the shortened 75 minute version you really haven't seen the film, since that removed some dialog sequences and repeated some action and horror bits to bring the whole affair up to a reasonable running time. The shorter American version is okay, but it's nowhere near as good as the full original version (though I know at least one person who prefers it). The film is out on DVD in a version that has both the short American version and the longer, more graphic, original version.

One of the better Hammer Horror films. This is must see for anyone who likes horror and martial arts films.

For tickets and more information go here.
Posted by Steve Kopian at July 03, 2014