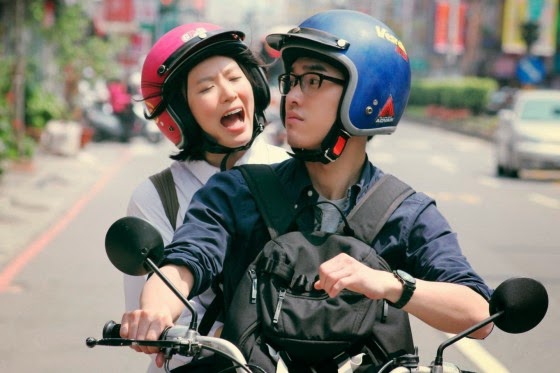 When I watch a film that I’m going to review I tend not to look too closely at the information regarding the film. A brief glance at the synopsis and I’m off. More times than not I try to let the film speak with for itself. With Apolitical Romance I put the film on not realizing that I was in for one of the biggest shocks of my brief career at Unseen Films.

The shock came after the film was done. I had had such a good time with the film that I had to see what else the director had done. I mean this guy didn’t spring from nowhere, so I threw the film into IMDB and then clicked on the director,Chun-Yi Hsieh, name. There was something about it that looked familiar, I mean there was this guy I had corresponded with...but... no it couldn't be....  I was sure I was wrong when I saw his list of titles nothing stood out. Actually what stood out was the fact that several of the links were highlighted meaning I had been there before. I clicked on the highlighted ones and it meant nothing. Then I clicked on Bian Zi and I damn near fell off the chair. Chun-Yi Hsieh was indeed the director who made Braid (Bain Zi), a film that opened my eyes not only to his work but also the need to try a film that any director presses into your hands.

The full story can be found here, but the short version of our encounter is that Hsieh tracked me down during Tribeca 2011 because I had walked out of bad short film collection before I could see his film. He insisted I needed to see his film. He was right, it’s a true work of a master-a feeling reinforced by seeing his other films. I emailed him a couple of times in the months that followed and he let me know about some maybe possible projects he had in the pipeline, and then I lost touch and track because there hadn't been much movement on the projects for a long while so I kind of stopped looking (serves me right)

With Apolitical Romance he’s returned to my radar and what a joy it is.

Apolitical Romance is the story of two twenty somethings in Taiwan. He works for one of the bureaus of the government and has just finished writing a book on etiquette for interacting with the people from Mainland China, the trouble is he know no one from the Mainland so he made most of it up. His boss has given him a week to fix it. She is a Mainland girl from Beijing who is in Taiwan trying to find her grandmother’s great love.

The pair meets in a restaurant when she is giving the staff kittens by insisting on ordering her dumplings by weight rather than by the number of actual dumplings. What transpires is a week together as she agrees to help him fix his book if she helps him find the man she’s looking for. Do I need say romance eventually follows?

The English title is a misnomer since politics hangs over the film. Everyone talks about the difference between Taiwan and China but its not really the focus of the film, this is after all a romance. A better English title would have been a straight translation of the Chinese one Several Ounces of Boiled Dumplings which is the girl is trying to order when the pair first meets.(The title comes from the director being confused when he went to China and had to order dumplings by the ounce. Actually much of the film is based upon conversations he's had with friends of his.)

A charming character driven comedy, the film works because the film doesn’t try to do the typical romcom nonsense, instead the film largely just lets the film interact and talk. The film sets up the situations of the quest and then just lets the pair wander about and find each other. It’s a novel thought that gets away from most recent romances which feel the need to prime the pump to keep things going. Here we just have two characters being and we are so much better for it. Actually the film’s only real flaw is that the film stumbles toward the end as it has to come to some sort of conclusion.

I know it’s going to be hard for most of you who will be encountering Chun-Yi Hsieh for the first time with this film, but having seen a number of his short films I want to say that he’s the real deal and then some. This is a guy who is one of the best directors working today.Period.  Based on his body of work he can do anything and you need to put him on your radar. He’s going to be making films you’ll be talking about for years. Hell I saw his shorts years ago and I’m still talking about them.

If you want a really good romance and if you want to get in on the ground floor of the career of a director who is going to be a force to be reckoned with in world cinema see Apolitical Romance when it plays tomorrow at the Asia Society.

For more information and tickets go here.
Posted by Steve Kopian at July 12, 2014