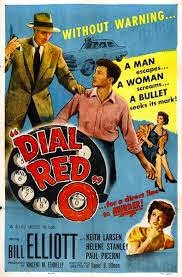 Things are set in motion when a vet escapes from a psychiatric hospital and heads to see his wife. When he gets there she's not home.He leaves to try and find her. It transpires that the wife has gone out to meet her boyfriend, a one time friend of her husband's. She wants to celebrate because she's served her husband with divorce papers. The boyfriend is not happy since he's happy  with the relationship as it is since it allows him a girlfriend and his wife and son. When she pushes the boyfriend snaps and kills his paramour. Thinking fast he makes it look like her husband did it.

Currently out on DVD from the Warner Archive and worth a look as part of their Bill Elliott Detective Mysteries set.

Of interest to some is the fact that Sam Peckinpah was the dialog coach for the film and has a bit part playing the cook in the diner.
Posted by Steve Kopian at July 21, 2014