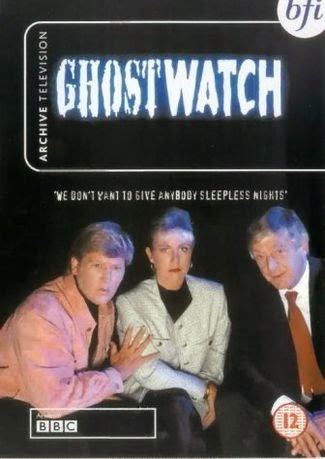 Legendary BBC movie about a live TV investigation is one damn creepy film. Originally broadcast in such away that if you missed it you'd think it was a real broadcast, the film scared a large portion of the audience.

The film is the story of a Halloween broadcast from a council home in England which has been a hot bed of paranormal activity. As events transpire in the house, host Michael Parkinson talks to a parapsychologist and takes viewer calls in the studio. What happens in and outside of the house ends up leaving everyone shaken and worse...

If want to see a scary movie see this film. I can only imagine how I would have reacted to it if I didn't know if it were real or not. Even knowing that things were not real this film unnerved me. It bothered me so much seeing it in the middle of the afternoon that all I could think was how glad that I wasn't seeing this at night.

The power of the film is that it plays it all straight. You fall into everyone selling you the story completely. The film also sets up all of the expected tropes of ghost hunting shows and found footage films like Paranormal Activity. Those shows/films owe a huge debt to this film.