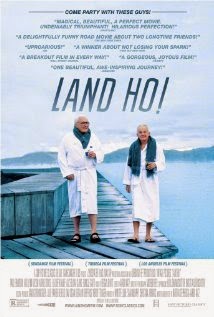 LAND HO! opens friday in theaters. I saw the film at Tribeca and had a blast with it. Now three months on I find it still hangs with me when other Tribeca films have faded. In the hopes of getting you to put it on you schedule for next weekend I'm reposting my Tribeca review

Talking to people after the screening at Tribeca I found that people either loved this or just liked it. Feelings ran high. Strangely I fell into the film and I loved it the more it went on.

Colin goes to visit his friend and one time brother in law Mitch at his home. Colin's second wife has dumped him while at the same time Mitch has just "retired" and doesn't know what do do with himself. Instead of spending the time just hanging out Mitch informs Colin that he's booked them a trip across Iceland and without further adieu the pair is off for a grand road adventure.

A rambling road film this film is great to just look at. If Iceland wants a people to go to their country show them this film since odds are most audiences will at least look into going. I know I did. I would love to be able to just pick up go around some place like our two heroes.

How you react to the guys will determine how you ultimately feel about the film. It took me awhile to warm to gruff vulgar Mitch. He's a surgeon more interested in pot and getting laid than anything else and he's very direct in everything he says and does. Why the soft spoken Colin puts up with him is a mystery that will drive some people up the wall. For me the reasoning does reveal itself as we eventually see that Mitch is a really sweet guy, he's just a big kid who never really learned good social graces. Somewhere along the way it all clicked for me.

Actually one of the things that clicked was the use of music, driven my some wonderful songs, including the hit Big Country, this film just pulls your heart strings and makes you feel good. I'm not ruining anything by saying that this film wonderfully doesn't have a sudden dark turn in the final couple of minutes- this is just the guys traveling to the final fade out.

Will there be a sequel? Who knows, but if there is I for one would gladly travel once more with these two grand old guys.
Posted by Steve Kopian at July 08, 2014