Every year NYAFF has a collection or two of Korean short films and almost every year its sparcely attended which sucks because every year some of the best films of the festival are shown there. This year the collection has moved away from the Walter Reade and is screening at the Asia Society. Once again the the scheduling monkeys of the festival have wrecked the chances that anyone will see it since it's screening tomorrow night at 630. This means it's up against the closing night at Walter Reade (with some big films) and Takashi Miike and Sion Sono films at the Japan Society. So unless you;re not a Miike or Sono fan and you don't care about the films at Walter Reade you're going to have to make an effort to go to the Asia Society so as not to miss almost two and a half hours of shorts.

In the interest of giving word on the films screening I've gotten my hands on two films (thank you Joe Bendel) and the reviews follow.

(and if anyone goes please send me a report) 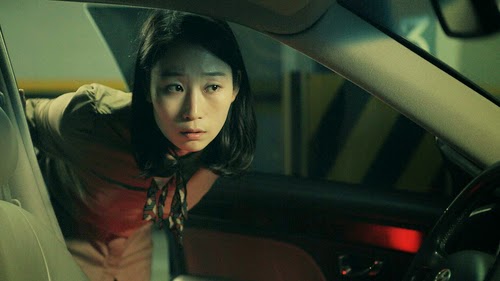 TRUNK
A woman sees an open trunk of a car in a parking garage and goes over to close it...but it won't close...she then calls the owner...thus beginning a twisted cat and mouse game

Wicked little short with a wicked twist is a neat little film. This is one of those impossible to write about films that will be wrecked if I say too much. Actually I'd write it up properly but you need to go see this with an audience and gasp along with them.

Films like this are ane of the reasons I love the short film collections at NYAFF.

(and yes the Author of Understanding movies is a man named Louis Gianetti)
Posted by Steve Kopian at July 09, 2014