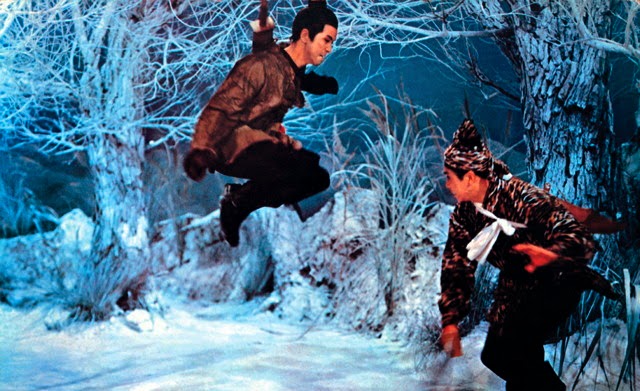 Genre changing action film has Jimmy Wang Yu as the son of a slain swordsman. Raised as his father's teacher's son after his father is killed protecting his master he grows up to be the best of the best. When three of his fellow pupils insist on dueling he refuses. He eventually relents taking on his teacher's daughter in hand to hand combat. Frustrated at being beaten she blindly, and accidentally chops off his arm. Staggering from the battlefield he ends up in the home of a young girl who takes care of him. While thinking that he is a cripple and unable to fight our hero soon discovers a way of fighting with his one remaining arm and as a result is plunged into aiding his old school from an enemy seeking to get revenge.

Solid action film is a bit less action packed than many films that followed in it's wake...and what a wake it was with numerous in sequels and alleged sequels (including one against Japanese legend Zatoichi) rip offs and homages all following. This film is a game changer and it marks the point at which Hong Kong cinema began to really notice the male audiences. Here at last was a film that was getting repeat visits by guys who saw themselves in the wounded, but honorable hero.

An extremely character driven film this is a movie that uses the action as a supplement to the the story being told. While the battles are important, they are not the real reason that the film works, it works because you care about the characters, especially Jimmy Wang Yu's titled character.


For tickets and information go here
Posted by Steve Kopian at July 04, 2014