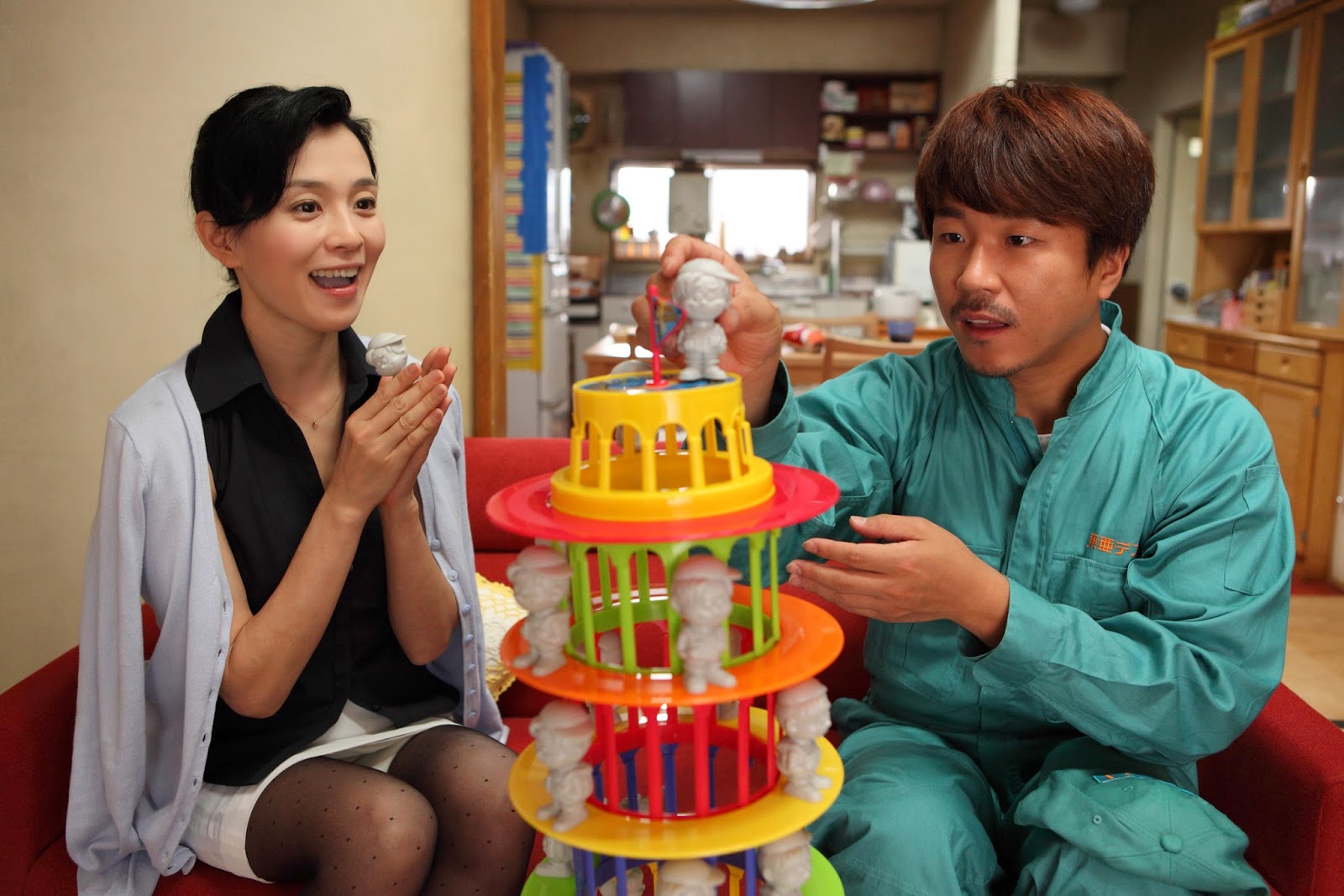 Continuing a look at the magnificent film selection programmed by The New York Asian Film Festival and Japan Cuts that will be shown at The Japan Society this weekend...

After THE SNOW WHITE MURDER CASE, a mystery from director Yoshihiro Nakamura whose extraordinary reputation (FISH STORY, GOLDEN SLUMBERS) will have to speak for itself as I haven’t seen it, MARUYA, THE MIDDLE SCHOOLER is set to turn up into down and left into right with its logic destroying blast of wild imagination. At the outset a voiceover narrator defines a fantasist as someone who cannot distinguish fantasy from reality, which is not only an apt description of adolescent Maruya but for the very film itself. After the 7 year old shares flights of fancy that see his parents and little sister as a highly trained band of US secret agents and then a brood of hideous alien invaders, a flash forward finds the 14 year old Maruya obsessed with visions of a more sexual nature. He imagines a company of topless women circling around him in a mock exotic dance and is constantly obsessed with the unattainable goal of touching his tongue to his penis. This describes the first ten minutes and things only get more spectacular. 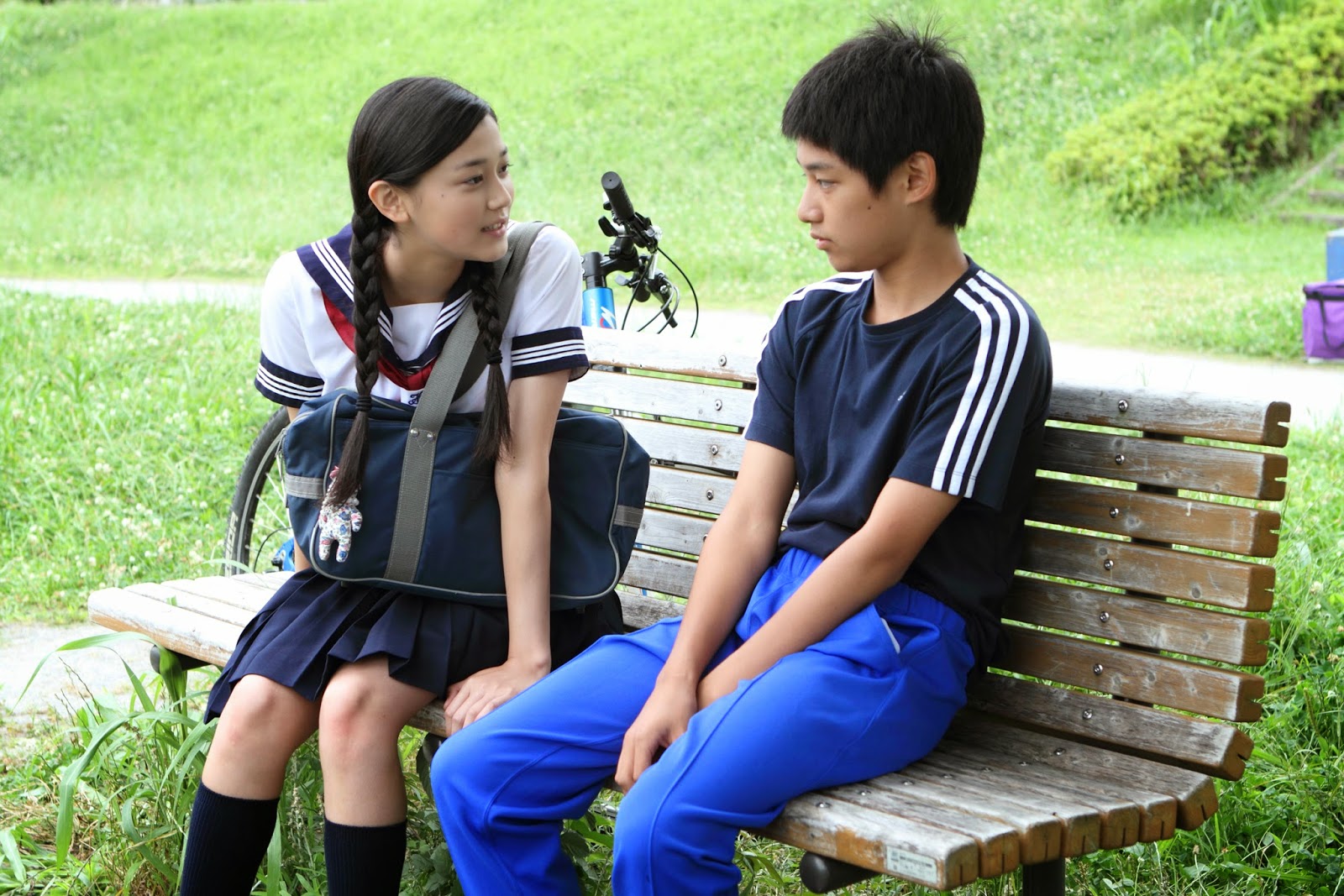 Throughout MARUYA are spot on pop cultural references proving director/writer Kudo Kankuro to have a keen insight into the genre landscape. His screenplay resume is extensive, going back to 2002’s PING PONG, and including Miike’s ZEBRA MAN movies plus this year’s fellow festival entry, satirical comedy (also helmed by Miike) REIJI. There is a hilarious riff on Korean soap operas and intense dramas, with the assistance of Ik June Yang (director and star of BREATHLESS!!) who shows up as a Korean soap star that fixes appliances for Maruya’s infatuated mother. It is one instance of real life becoming the stuff of fiction, even taking on the genre’s characteristics, so much so that the actual world of the MARUYA’S characters becomes as difficult to fathom if not more so than Maruya’s mental manifestations.

As both writer and director of MARUYA, Kudo seems to have found his true voice and strong sense of purpose, getting at the nature of why some indulge in fantasies to such a large degree and the reasons why escapes to fantasy can be critical to the human spirit as an alternative to succumbing to darkness.

Here lies a mammoth day for indespensible films, anchored by THE GREAT PASSAGE and THE DEVIL’S PATH, both immaculately conceived narratives on individuals gripped by obsessions to achieve a goal, though the former dwells in the light, the latter in extreme darkness. 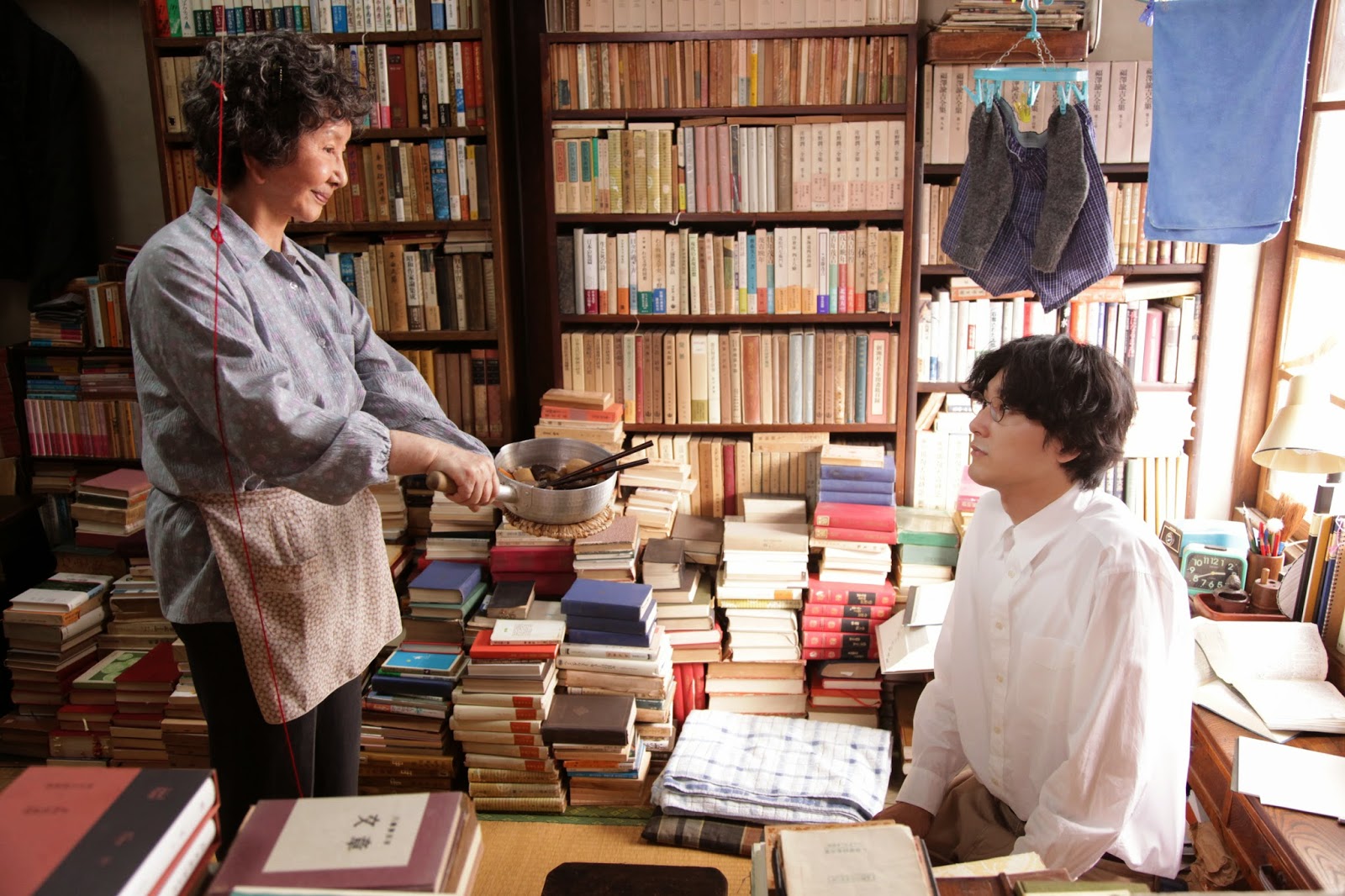 THE GREAT PASSAGE begins in 1995, marking a time when digital media still remained somewhere off in the horizon. The extremely introverted Majime is brought on to help edit a dictionary. It is a position of daunting proportions undesirable to most, but one that suits the linguistics major uncannily. As Majime joins the diligent team of word analysts, a grand purpose is laid out before him: to not only assemble a dictionary, but a living one taking in modern usages and the creation of slang expressions by younger generations. This, according to the veteran anchor of the group  Matsumoto, would create a connection between people across a vast sea of language.

In fact the story unfolds with this very process being undergone on a different level: Majime, so challenged when it comes to relating to people, comes to learn about himself and connect with more confident and brash colleague Nishioka, whose early interactions exemplify an inability for people to connect.

The film could have focused on Majime as he overcomes his ineptitudes to forge personal relationships, and ended up being a delightfully comic romp. But it wouldn’t have ben great. We move through time instead, finding a more grown Majime and his colleagues weathering the lack of popular support their undertaking has and the vastness of what is involved in completing their task correctly. The soundtrack gives lends a sense of wonder and grace, often not unlike the scores of a Miyazaki anime, with just enough electrically charged oomph to underscore the film’s few stormier moments.

The movie itself, like the tremendous undertaking of its protagonists, is a labor of minute detail. When a discussion of refining the pages so that turning them is more pleasing  to the touch, it is clear that the setting is not merely a function of the story. THE GREAT PASSAGE expresses a genuine yearning for a time when tactile media was still a significant part of our lives. 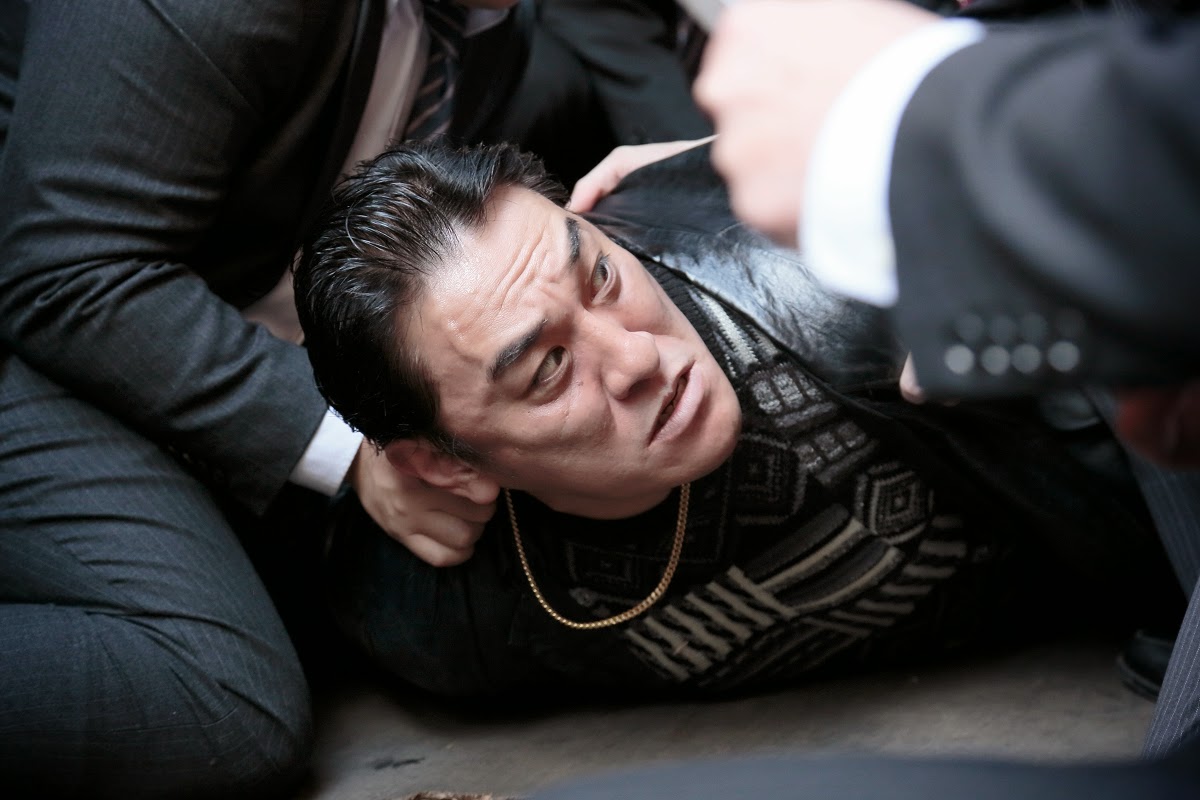 THE DEVIL’S PATH presents an entirely different sort of ambition, dividing its time between true crime dramatization and a reporter (Takayuki Yamada) obsessed with uncovering the story while reluctantly dealing with a mentally deteriorating mother and exasperate wife. After a grizzly series of murders, the physically intimidating, rage-prone gangster Sudo is found behind bars, questioned by reporter Fuji (Takayuki Yamada) about the crimes he was convicted for. Sudo is eager to talk, however indirectly, out of a desire to get to an accomplice he felt betrayed by, an impenetrable individual known as “sensei.”

An unflinching dramatization of their crimes unfolds, including acts of insurance fraud, arranged accidents, dismemberment, and torture. It is not for the squeamish.
As usual Yamada brings 100 percent to his role, giving the journalist a countenance of exhaustion at his family troubles that cannot bring down his sense of moral outrage as he confronts the suspects from which he tries to uncover the truth. The sadistic gangster known as “sensei” is brought to chilling reality by Lily Frankie in a shocking performance when considering his usually soft characters, most recently the good-natured goofball of a father in LIKE FATHER, LIKE SON.

Moved by a soundtrack that is filled with scratchy electronic tension, once again calling to mind Fincher and his collaboration with Trent Reznor, and punctuated by moments that are Giallo-esque, this is true crime drama at its most hardboiled. 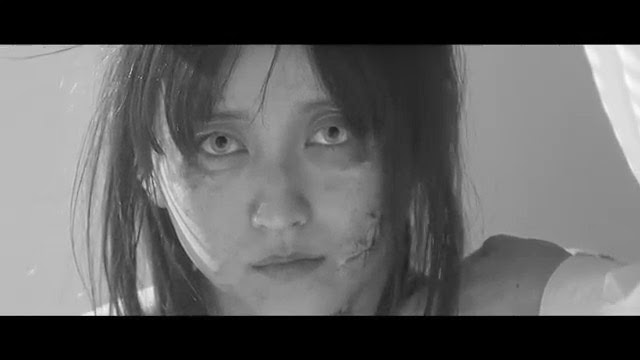 MISS ZOMBIE is a true surprise of the festival, bringing a new and refreshing take on a genre that has long been stale. From director SABU, whose work I have always associated with hyperkinetic movement, comes a surprisingly yet appropriately slow, drifting picture of quiet dread. Often the only sounds of the film are a ghostly howling wind. The film begins where well-known zombie comedy SHAUN OF THE DEAD ended: The threat of a zombie apocalypse being neutralized, the undead are introduced to the population as dull-witted pets or perhaps slave labor. Yet there is no joking here. SABU’s minimalistic plot finds a family unit, whose members have only somewhat clear relations to one another, receiving a “low level” zombie ordered by the group’s patriarchal figure.  She is viewed with awe and bemusement by her new owners, and then set to work on menial tasks on their property.

SABU turns the genre askew by de-emphasizing the threat to humans and creating a sense of dread out of human vice: senseless cruelty to those different or unknown to us as carried out by children, and unquenchable sexual desire leading to unthinkable acts by the men. It leads to a psychological terror different from the usual fight for basic survival, yet effectively made out to be even more fearsome.

The slow, drifting pace of the film culminates in an unforgettable pulse pounding 20 minute conclusion. Set in monochromatic black and white that is reminiscent of Japanese body horror classic TETSUO: THE IRON MAN as much as the obvious original NIGHT OF THE LIVING DEAD, there are sparingly doled out yet wondrous effects in store. The image of a rising sun presented in this stark black and while film stock is stunning.

Add to this lineup, ETERNAL ZERO which Steve had high praise for in his review here and this is a day to consider camping out at The Japan Society. 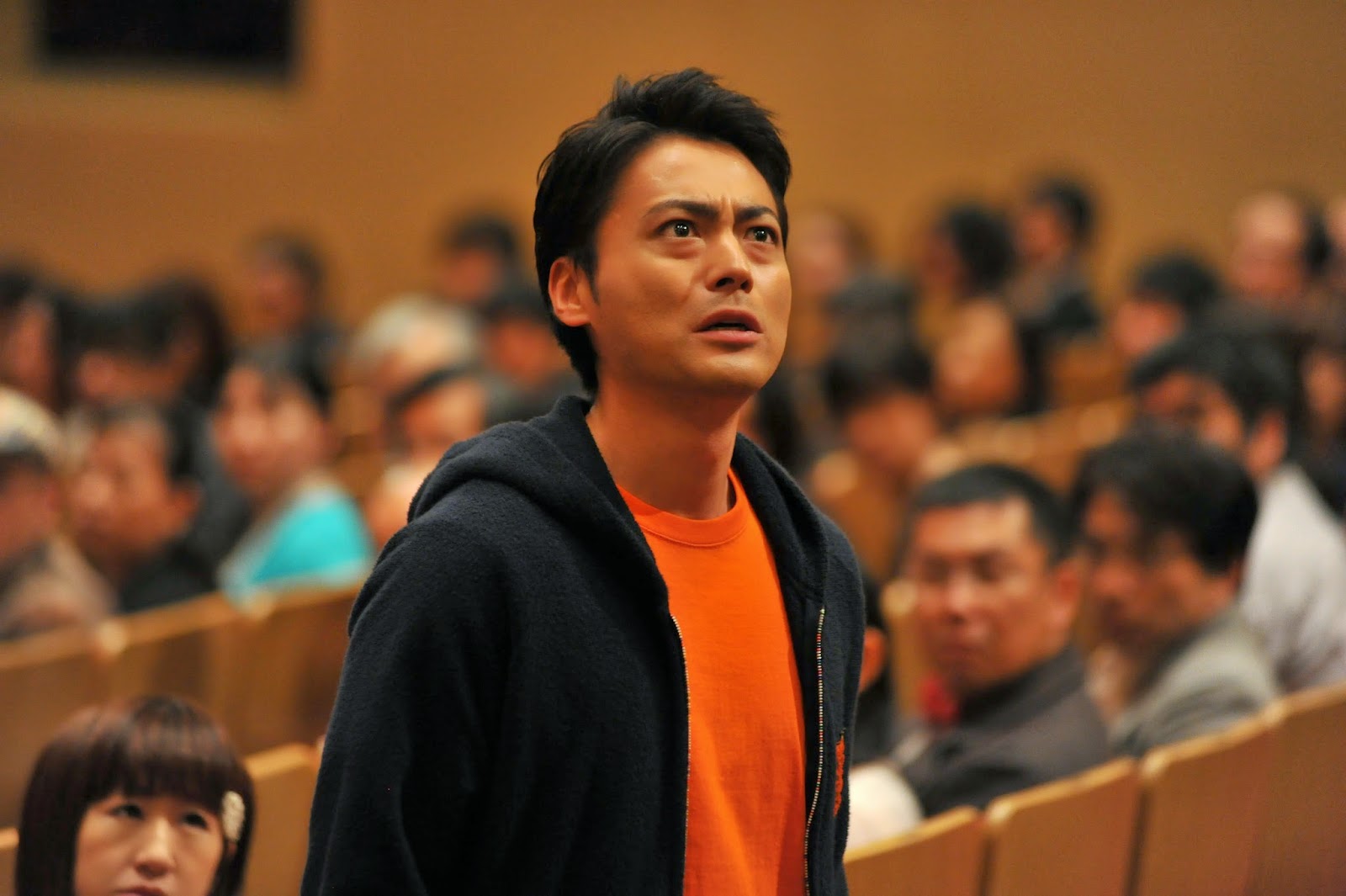 MONSTERZ is the only film I’ve had a chance to see of those playing on the last day of the inter-festival throwdown. Interesting as a representation of a Japanese take on the superhero genre, and as an adaptation of a South Korean movie (HAUNTERS), this is also probably the most straightforward genre and mainstream film of the festival and helmed by Hideo Nakata who once stirred up the horror genre with THE RING. The South Korean original was itself indebted to the original manga DEATHNOTE, which wrote the book (that pun, totally intended) on ultimate VS showdowns between individuals of seemingly limitless and directly opposing powers. I was ultimately disappointed with the film, finding characters’ dialogue so wooden and superficial as to be difficult to take seriously. The humans interacting with the two main characters are inept beyond explanation. The ultimate message is also murky at best; although there is some compassion for the villain who was conceivably turned into what he is by being born into an unsympathetic world, it doesn’t gel with how things turn out for Shuichi. If you can get past these flaws, it’s worth a look for strong performances by Tatsuya Fujiwara (‘Light’ in the live action adaptation of DEATHNOTE) and Takayuki Yamada as the villain and hero respectively and some inspired chaos involving large numbers of human pawns forming overflowing mobs set to bury Shuichi alive.