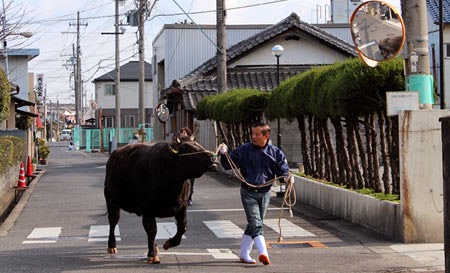 The story of the Kitades, a family that has run a small butcher shop for over a century just outside of Kyoto. Over the years they went from raising their own cattle and animals and slaughtering them locally, to simply having a butcher shop. As the film opens the family is in the process of closing down the slaughter house and embarking on a new way of things.

Wonderful portrait of a family and a way of life, the film goes off into several unexpected directions, drum making and the prejudice of the Japanese class system. The family is descendants of the Baruku people who were always held to be the lowest of the low even after the class system was officially dismantled in the 19th century.

To be honest this is a tough film to really write up. Not so much because there is nothing to discuss concerning the film, more because by the end of the film you feel as though you you've kind of had them join your family. These are good people who are just trying to get along within their way of life.

The best thing I can say is that this is a great film that you will fall into and go along with.

The film plays Saturday at noon and if you can stand a few graphic scenes the film is highly recommended.

For tickets and more info go to the Japan Cuts page here.
Posted by Steve Kopian at July 18, 2014