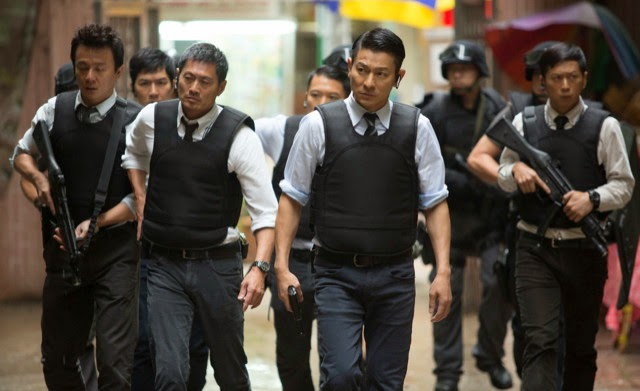 If you want a film that is logical and reasoned look elsewhere.

Slam bang action film has good cop Andy Lau hunting really bad bad guy Hu Jun and his gang. Jun will do anything to get what he wants and everyone and everything is potential collateral damage. As the stakes get higher, Lau finds that no one and nothing is safe, even his sense of law and order.

Because I had neard about the final shoot out  I would have loved to have gone to the screening tomorrow but its 915 start meant that unless I scoot out before the end I'd be home at 130 in the morning so I passed. Instead I just watched my import DVD.

Let me be honest and up front the reason to see the film is the set pieces. They are incredible and from what I can see from the DVD they'll look great in 3D. Trust me they are jaw droppers and bar raisers from the opening armored car heist to the final lets level Hong Kong shoot out (no really they level a huge chunk of the city).

Unfortunately what's between them, while enough to drive the film forward, are some really dull scenes with men being men and no good deed not blowing up in the do gooder's face. Trust me there are enough manly men staring and being stoic to last a lifetime. The result is the film slows way way down in the space between the bullets in the firefights. I completely understand why people will talk the action up as among the best of the year while rating the film several points lower.

As I said above if you love action yes absolutely go. If you can see it big and in 3D like at NYAFF its not only recommended but an absolute must see.

For tickets and information go to the festival website.
Posted by Steve Kopian at July 08, 2014