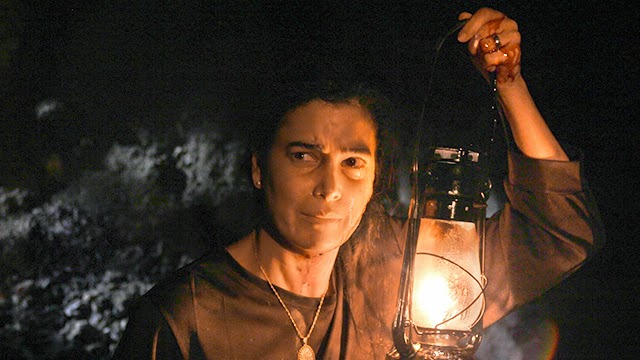 In 1981 Dulce is imprisoned for killing her husband and being involved in the disappearance of her children. Thirty years later she gets out of prison and is placed under house arrest in the very house where all the bad things happened. However as she soon finds out the past and the present are not that far apart.

Intriguing  horror film is supposedly the first from Venezuela. Its also one of the highest grossing films in Latin America. This is an old school horror film that is also a dynamic drama. Using the dramatic interplay between the characters  the film generates a hell of a lot more suspense then if it had just gone for scares. Additionally the film is lifted out of the classification as to whether it's just another horror film.

Doing interesting things with framing, the use of shadow (for mood and to represent characters), and the reoccurring theme of duality this is the work of a director,Alejandro Hildalgo who is very much at the top of his game. Most times these days when you watch a horror film anything beyond the scares seems to be an after thought  but the design of every facet of the film seems to be designed to create a mood or prepare you psychologically for something later on in the film.

To be honest I'm not sure completely what I think of the film. I know it's very good, but somewhere early on I started to watch the craft of the film (the shots, the set design, how things were arranged) more than the film. Its not that the film was bad, more that I was being a film geek and I was watching how a master filmmaker was doing his tricks, sort of like how I'll watch a magician.

Most certainly the film worth seeing when it plays at Fantasia and elsewhere- especially if you are sick of typical modern horror films.

The film plays tonight and July 30. For tickets and more information go to the film's festival webpage here.
Posted by Steve Kopian at July 26, 2014