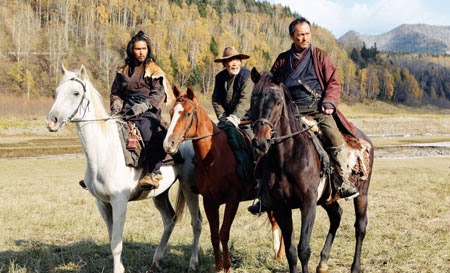 I got excited when I heard that Sang Il-lee was going to remake Clint Eastwood’s Unforgiven as a Samurai film starring Ken Wantanabe. There was something about the idea that absolutely delighted me. There was something about the culture that made me think that the story would be ripe with new shadings. And of course the thought of Wantanabe riffing on Eastwood was wonderful.

Having seen the film I’m both delighted by some of what is in the film and confused by some of the choices. While it manages at times to take flight as something special, it is unfortunately too chained to the script of the original.

Okay for those that don’t know the story goes something like this- in a small frontier town a prostitute is curved up by some customers. The bad guys are not really punished by the local police so the other prostitutes put a bounty on the bad guys heads. By the time it reaches the ears of a failing farmer(once crazed killer) with a couple of kids its turned into a horrific act that needs justice. However once on the road things are found not to be so black and white and a return to the old killing ways is troubling for all involved.

That’s the plot of both version of the story. I should also say that both films are westerns even though the Japanese version is set in Japan.

And that’s the were the remake falls down. Set at exactly the same time as the original film, Japan had opened up to the West and was rapidly transforming into a weird hybrid. In Unforgiven, other than a few Japanese moments and some samurai swords, this looks like an all Asian version of the original. That doesn’t make it bad, it just makes it kind of like why bother? Actually it makes it so close to the original that you have to wonder why they bothered since you need to get through the film at least once, maybe twice, before you can take it on its own terms. Its very hard for anyone not familiar with the Eastwood film to take this new version for it's own beast right off the bat.

I’ve seen the film roughly two and a half times. I saw it once on its own and then I went through the screener another time and a half to try and have it play as its own thing. In doing so I learned a couple of things about the film:

First if you’ve seen the original, this remake is way too close to the original. I mean way too close at times. The dialog, shot choices and other details  seems to be identical. Its so close as to make you wonder why they bothered. Even three times through its so close that I can’t shake the sameness.

Second the Japanese cast, especially Wantanabe is very much better than the American cast. There is something more tortured about them. The loss is greater, the cost of the violence more destructive. By the time the film ends you know how broken Wantanabe is, damn broken.

Thirdly and most importantly, when the film gets away from the chapter and verse remake it soars higher than the original. Seeing the flashes to Wantanabe’s past help the film clue us in as to how low he was before. The ending of the film packs a bigger punch. Even the changes in the action sequences are better. I’m torn between telling you exactly what all of the differences are and letting you discover them for yourself. I think it’s better that you discover them for yourself

Under no circumstances should you consider this a bad film. It’s not. It’s a good one. The trouble is this could have and should have been a great film. Everything about the film is first rate except for its reliance on sticking too close to the earlier film. Had they really staked out new territory with the story this would have become the film that shook the world instead of one that just copied it.

Is it worth seeing? Oh yes most certainly, especially on a big screen. I suspect that if you haven’t seen or can’t remember the original film you’ll like this more than if you have seen or remember the Eastwood film.

The film plays tomorrow at The Japan Society and tickets and more information can be found here.
Posted by Steve Kopian at July 14, 2014