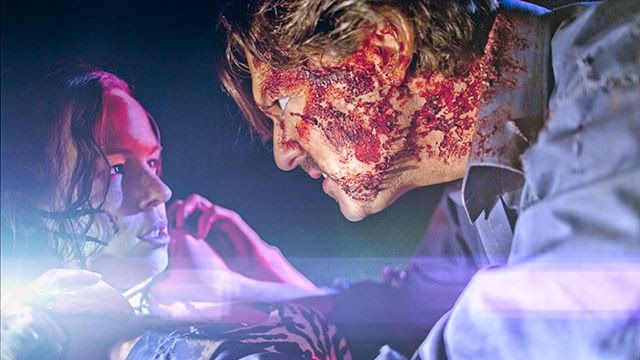 Three kidnappers are transporting their cargo when things begin to go wrong. First they end up on the wrong road. Stopping for directions the clerk behind the counter warns them that they are on the wrong road and should turn around, the road on the map may look like it will get them where they want to go, but it won't be so easy. Further complications arise, several having to do with their cargo and that's all before things get really off the wall.

A largely solid melding of film noir and supernatural horror starts at a gallop and then picks up speed. We're barely 20 minutes into the movie and you're left wondering where in the hell this is going to go. I mean so much has happened whats left?

I don't want to go into it. I want you to sit down and watch this film for yourself and discover its poisoned confections for yourself. I say this  because the film is just premiering and it needs to find an audience before it's spoiled. I read the write up on the festival page and it gave a little bit too much away.

Though to be perfectly honest the real problem with the film isn't fully the fault of the write up, it's in director Joseph O'Brien's script which kind of runs out of steam in the second half after a great first one. If you've seen any number of horror films you'll probably guess where this is going. On some level it's clear early on, but O'Brien is so good at distracting you for a large chunk of the film that you think it's going to do something different because he's set it up to be different. Then it all folds down exactly as some might expect.

Ultimately this is a really good B movie that if taken on it's own terms will delight you. If you can give yourself over to it and not mind the bumps in the road give the film a shot.