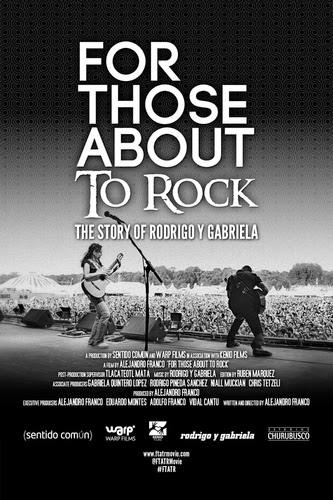 This documentary on the duo Rodrigo y Gabriela was one of the must sees at Sound + Vision. I had stumbled upon the film at the Festival Scope service and got excited at the prospect of seeing it on a big screen with big sound.  When the film was announced as part of the festival I was absolutely thrilled.

Now that I've seen it I find I'm torn about how to report on the film.

Beginning with a history of rock in Mexico the film then shifts gears into the story of long time friends Rodrigo and Gabriela who wanted to be metal rockers and instead became rockers of another kind.

When the the film gets to the music this film rocks. Its a glorious celebration of Rodrigo y Gabriela and the music they play. When its firing on all cylinders you'll want to get to get up out of your seat and dance.

The trouble is that this film has long dry spells of talking heads. I think something like 15 minutes go by before we hear any music from the duo, and that is some of their heavy metal music.  After that we only hear snippets until well into the second half when we finally get some extended performances. Those are amazing those are the reason to see the film.

If you're a big fan most definitely. There is a lot to love. If you're a casual fan, or one that just wants the music, I'd say give it a shot, just be aware there is a lot of talk.