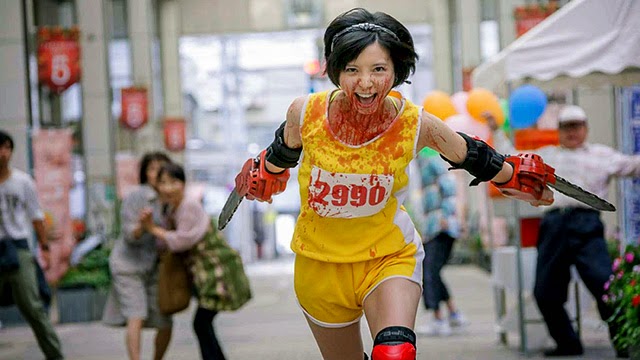 Noboru Iguchi's totally insane take on race to save one's family is probably his most normal film to date. Yes it's a grand send up of films like Battle Royal or Hunger Games  if they were infused with long looks and female bottoms at over the top deaths with spurting blood,  but the film also weirdly has a real spine to it that is played straight would be one hell of a straight out action film (like Hunger Games or Battle Royal.)

Naoto Tamura is an obnoxious young man who'll screw over anyone or anything just to get his way. He seemingly hates everyone even his put upon mother. Then one day he gets a package and a phone call. Someone has kidnapped his mother. If he doesn't work out the directions hidden in Yusuke Yamada's  novel LIVE (the book the film was actually constructed from) his mother will die.  Things become complicated when Tamura finds out that his mother isn't the only one with a relative stolen, lots of people have had their relatives taken, and all are trying to get them back.

What follows is a bloody and funny film that not only sends up the death game genre but also family relations. What would we really do to save our loved ones?

Not to put too fine a point on it I loved it.

While it may not have some of the fall out of your chair laughs of some of Iguchi's other films, it scores a lot of points in a couple of key areas, first it's funny or if not funny compelling all the way through. With something like Karate-Robo Zaborgar the film ran out of ideas before the film ran out of time. Granted the film is a little long at an hour forty five minutes, but at the same time you're invested until the end.

The other reason the film is near the top of Ighuchi's output is the fact that the film has a bit more on it's mind than just being silly bloodbaths.As I said the film is a clever send up of the genre. While that maybe easy to do on the short term, being able to sustain the humor for an almost two hour feature is a feat.  Doing so while asking questions about society and our relationships is a bigger one.

Okay I will admit that this is a Iguchi film so the blood and mayhem does take center stage (I mean we have a battle between a girl with crossbows on her wrists and another with chainsaws for crying out loud) but at the same time he seems to be going for more than just blood and laughs.

I should also point out that high art this is not , unless you like your art soaked in blood. This is clearly not for all tastes, and even those who do like the director's other works may find it too long and they may quibble about the over use of CGI mayhem. Still for those with a certain sense of humor and a taste for blood and guts this film can't be beat.