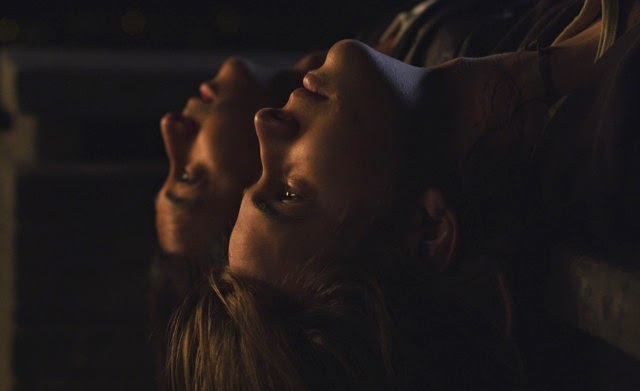 Set at the time of the wide financial collapse in Ecuador the film follows Juan Pablo as he goes to visit is big wig uncle in the country. When he rescues Juano from being beaten by his Uncle's men, the pair find that they have much in common including  music and motorbikes. However things become complicated when Juan Pablo begins to feel a bit more...

This is a good looking film with a great visual style (the idea of an upside down world is a repeated motif). The film also has a wonderful cast that manages to keep things watchable even when the script lets us down.

While far from a bad film the film has a strong sense of "been here and done that" hanging over it. While the  plot is dressed up with details of an actual financial crisis and the potential gay romance, this is little more than a rich poor friendship/romance tale. If you've seen any sort of film similar films you'll know where its all going.

I have one other problem with the film and that's Juan Pablo's character doesn't really seem to do much. He looks good, but he doesn't seem to say or do much other than react. Yes, there is a performance going around the eyes, but at the same time there isn't a whole hell of a lot to latch on to. He seems a bit too much like a stand in for the audience then a real character.

This plays July 15 and 16. For more information and tickets go here
Posted by Steve Kopian at July 14, 2014