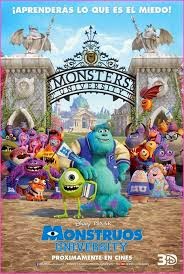 Prequel to the classic Pixar film is an amusing follow up that proves that Pixar can get sequels right when they aren't a Toy Story one.

The film is the story of the young years of Mike and Sully. Largely focusing n them as they go to Monsters U and eventually end up working at Monsters Inc, the film focuses on how Mike and Sully have to work together in order to survive college. Its an amusing romp that hits every single solitary college cliche and trope you can imagine short of naked co-eds.

Unfortunately while it is a good film it's not great. The film has two problems that prevent it from being great on it's own terms.

First the film is full of references to not only other films (Animal Hose is referenced). Its so full of references that anyone over the age of say ten is going to be able to know where parts of the film were lifted whole cloth from.  Additionally the film's designs are also full of riffs on other monsters. The film is full of Muppet designs and other creatures. Yea I know there is only so many cute creatures you can do but this is a little excessive.

The other problem is that no matter what happens you know its going to be alright since this is a prequel and we know Mike and Sully are destined for greatness....We know they are going to Monsters Inc. How can you fear for your leads when you know where it all ends. (And never mind that the cliches make it even less tense)

This could have and should have been a great film, but the makers went safe and easy and made a good one instead. Bitching aside I do like the film, but at the same time like most sequels and prequels and all of that this film isn't something we really needed, even if Pixar wanted the certainty of a cash payday.