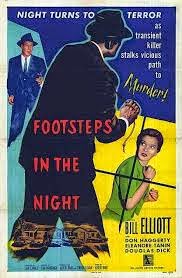 Final film in the Bill Elliott Detective Mystery series begins with a pre credit sequence of loud music coming from a motel. This leads into a wordless discovery of the body before the title comes up. Its an evolution of craft in the filmmaking at least as far as this series goes.

The dead man is one of the residents of the motel. The room belongs to the man who found the body, Henry Johnson. Johnson bolts afraid he'd be blamed for the killing. It transpired that when Henry was in another room someone killed his friend. The film follows as the police try to to locate Henry who is trying to get himself out of the trouble he's found himself in.

Don't try to guess who did it based on the clues, you won't be able to do it until very late in the game for any reason other than they make a point of introducing the killer early on for seemingly no reason. The reasons for what happened aren't revealed until late either.

Of course it won't affect your enjoyment of the film which is a good little crime drama. What I like about it is that it plays differently than the previous films. Yes it has the innocent man idea retread but it does something differently with it. Its not the same story.  I like that the film builds characters outside of the suspects and Elliott's Doyle. Its clear that had they wanted to they could have gone on, or gone to TV with the mysteries.

A wonderful end to the series, I just wish there was more especially at this level.

available from the Warner Archive
Posted by Steve Kopian at July 25, 2014