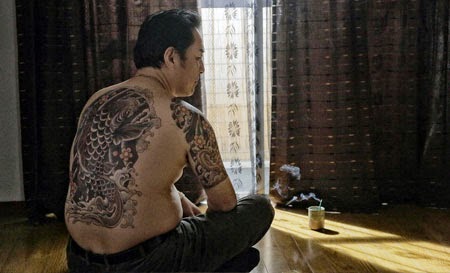 With this year's New York Asian Film Festival there are a couple of films that we've seen, and which because of time issues we can't get a full length review up before the festival screenings. In order to give you some word before the film screens I'm going to run a mini review so you can make up you're own mind

Yakuza killer on death row is waiting to be executed. He's found God but he still can't forgive one of his old compatriots so he tells the story of three unsolved crimes to a journalist in the hope of getting his old "friend" arrested.

Bleak, black unpleasant slice of hell and the evil things that men do. This is a very good little drama. Not so much a bang bang shoot 'em up yakuza film, this is instead a quiet drama where the horror of the violence is in its way even more unpleasant as a result. Seeing it really is to walk down the Devil's Path.

For more information and ticket go to the Japan Society Website
Posted by Steve Kopian at July 11, 2014