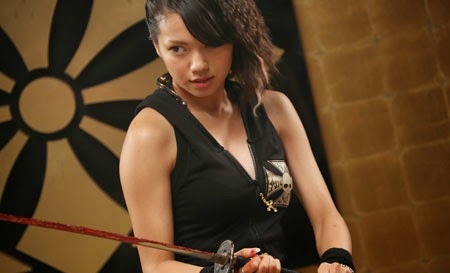 With this year's New York Asian Film Festival/ Japan Cutes there are a couple of films that we've seen, and which because of time issues we can't  get a full length reviews up before the festival screenings. In order to give you some word before the film screens I'm going to run a mini review so you can make up you're own mind .

Sion Sono returns to a script he wrote when he was 17 for a wild wild wild film, even by his standards.

The plot of the film has a director given the chance to make his action masterpiece by a Yakuza boss who wants to make his daughter a star. Unfortunately the mayhem in the film is real and part of a Yakuza war.

I have no idea what to say but this film is as just nuts. Its bloody and off color and completely crazy.

Go see it if you can score a ticket (the screening is sold out).

For more information go to the Japan Society website
Posted by Steve Kopian at July 09, 2014