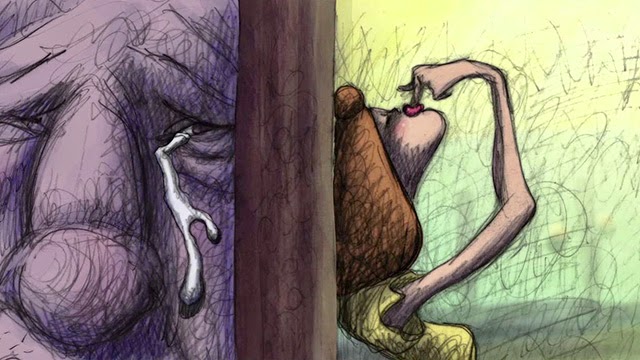 The largely wordless CHEATIN concerns a bookish young lady who literally collides with a hunk of a man at a carnival and ends up wedded to him.Things take a turn for the worst when he begins cheating on her and she plots revenge..

Possibly Bill Plympton's most beautiful and lyric film ever. A magical and marvelous marriage of image and sound it unwinds in a series of truly spectacular set pieces that are true delight to behold. Its a film that had me murmuring "oh wow" through out.

I can't say much more than it's one of the truly great animated films I've ever run across except to say GO.

the film plays later today and tomorrow at Fantasia. For more information and tickets go to the Fantasia film page here.
Posted by Steve Kopian at July 21, 2014