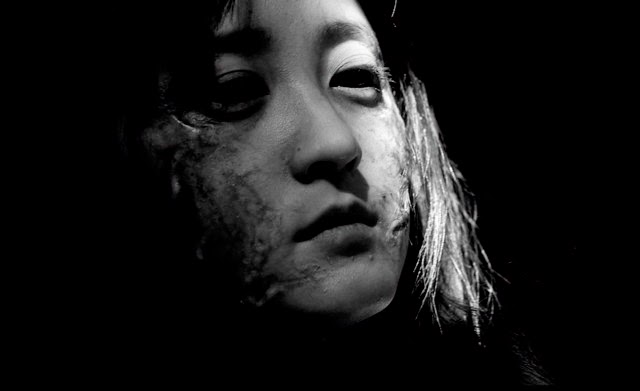 Leave it to the great Japanese director Sabu to bend the zombie genre sideways. He has so kicked the horror genre sideways that most horror fans are going to be severely disappointed when they see this film since the title would seem to promise the latest chapter in the over used, over done, and now stupid as a stick zombie genre. If you found that last line offensive, this film is not for you. The other people who are going to hate the film are the ones who want blood and gore. Sorry there isn't very much and even that is in black and white.

Instead of blood and guts and gore Sabu has instead crafted a small scale gem of a film that is more about people than monsters and the one's who are truly monsters are people. Its a film of dry wit and deep emotions, with a path that takes us from a place a relative detachment to an ending that will break your heart.

The plot of the film has a family being sent a zombie by an ex-employee. She is, he assures the family, quite docile. She can be used to help out around the house. You can feed her anything (fruits and veggies are okay), just try to stay away from meet because she may go feral. Complications arise almost from the start since the people of the village don't want her there. The family assures them that she is fine, there will be no trouble, she is a low level zombie, pretty much still human, and not to worry she'll live on the outskirts of town. Besides it's only going to be a couple of days...

I should point out that the zombie plague of the film is completely different than in any other film. Its a matter of fact, there are medical journals on the subject, there are stages and infection can take years. Not all zombies are blood thirsty monsters, or even cannibals, though diet does affect how the zombies behave. If you ask me this approach makes a hell of a lot more sense than in 99% of other zombie films.

A moody absurdist art house zombie film there is a hell of a lot more going on beyond the monsters. This is a film that works on so many levels it will spin most horror fans heads. Like most good horror films this film is concerned with the human condition. Its a film that is largely about the haves and the have nots, about hatred and bigotry, about man's in humanity to man, and about the quest for something lost. Its a profoundly sad film about loss. By the time the film ended I felt as though some one had hit me with a large stick.

Interestingly all of the monstrous acts are committed by humans. Our heroine is stoned and stabbed and abused repeatedly by humans. She takes it quietly because she can't speak, but at the same time we can see the heart break and rage in her eyes. I want to compare the film to the abuse in this film in some ways to the abuse in a film like 12 Years a Slave because the zombie is very much in a similar position, perhaps an even worse one than the slaves in that film. Its not even that our heroine can fight back, she simply has to take it and go on. She has to endure it without even being able to scream in anguish at the cruelties, even the right to cry out is denied her.

My heart broke repeatedly. Some times it was an overt act such as the stabbings or the rape, but at other times, a look in the mirror, or a glance as mother looked at son. What starts out as a film with humor slowly changes into something troubling as the monster is revealed to be much more sinned upon than sinner. And then there are the moments where the living make choices that blow back in ways unexpected (I won't reveal those twists)

Somewhere somehow there is a quiet humanity to it all.

Sitting here writing this film up several hours after I saw it I'm torn. I desperately want to see the film again so that I can properly express and describe what is going on in it so that you know just how wonderful this film is but I can't.I had a one shot look at the film and after a certain point I stopped taking notes, I stopped trying to remember, I simply let this film wash over me. I went to the place and the film and experienced.

God help the fickle film going public. I want to curse the studios who won't release something different. To be perfectly honest I don't know if this film will show up in the US. I can't see it happening outside of some film festival simply because it isn't what people expect. As I said at the top the title promises blood and guts and not a story of humanity. Maybe perhaps NYAFF, but beyond that who knows.

If you want something off beat and truly unexpected put this one on your radar. Keep a serious eye out because if you're willing to go with it this film will knock your socks off, especially if you let it rattle around in your brain.