The final night of the Japan Cuts/NYAFF crossover: ALL AROUND APPRAISER Q: and UZUMASA LIMELIGHT

Two things to start: First-I did not have my camera tonight and I'm so bummed out. I'll explain in a minute. Secondly because the really cool intro to UZUMASA LIMELIGHT went long I had to leave before the Q&A lest I get home after one on a work night.

As always it was a great night for talking to people- Shawn, who seems to b living at Japan Society and Walter Reade was there and giving everyone updates on the world cup. Christina from Austin was there as well. As was Lee and several others who's name I don't know.

I also talked to David Powers from the NYAFF crew. He had come back from the Asia Society where Delinquent had played and apparently wowed tha audience with its over the top craziness. I wish I had gone. Unfortunately I was locked and loaded for the final two cross over films  at the Japan Society so I couldn't make the Asia Society films. 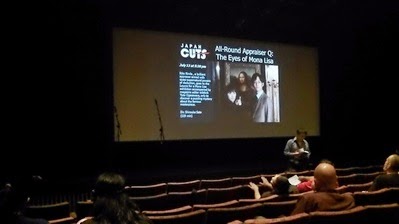 ALL AROUND APPRAISER Q: THE EYES OF MONA LISA is sourced from a series of Japanese mysteries about a hyper observant, insanely intelligent young woman, Riko Rinda who can appraise anything but the human heart. Self taught, she was never a good student until one of her bosses explained mnemonics to her and thus unlocked her brain.

The plot of the film has her going to Paris to potentially become a curator responsible for keeping the Mona Lisa safe when it makes a trip to Japan.  From that point things become complicated as she runs into shenanigans involving the painting and some of the people supposedly guarding it. (Could A theft be coming? Oh yes)

Personally I'm torn about the film. The film gives us what could be one of the great detective pairings of Riko and newspaper reporter Yuto Ogasawara and then spins the plot off oddly. What I mean is that a good quarter of the film is related to Riko potentially losing her abilities. Its a weird digression, granted related to the plot, but it's a bit too much. Also the mystery isn't mysterious- but thats no crime when you have such wonderful characters.

Personally this would be a great pilot film for a TV series. I liked it, I loved the characters-When's the next adventure? 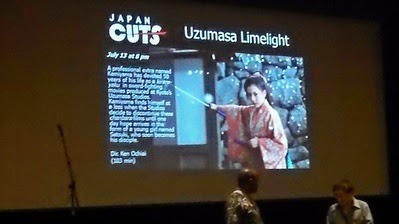 UZUMASA LIMELIGHT had the best prize giveaway I think I've seen- and I have no pictures from it. Four people had to go on stage and act out a samurai death at the hands of James. The best got a goodie bag of stuff, the worst got a t-shirt. It was a blast and a half and if I can find the video I will post it.

The film is set in Uzumasa the Japanese equivalent of Hollywood. The film concerns an aging actor specializing in dying on screen in samurai TV shows and movies. As the studio shifts to other genres he's forced to take work working at a theme park because a director of a cop show gets him blackballed. However he connects with an actress who wants to learn sword  fighting.

Yes the film is based on Chaplin's LIMELIGHT.  The film opens with a quote from it, there is a picture from it in one scenes and the poster states proudly this film is a homage to Chaplin's.  Its a little too obvious, and too much if you ask me.

I firmly like this film a great deal. I'm not in love with it, I know many people around me LOVED the film and were sniffling toward the end (and no that tells you nothing).  Yes I got a little misty as well, but I was also annoyed that the film as a whole wasn't as good as the final fifteen minutes.

The problem is this feels like it should be longer. We bounce through time. Unless someone makes a reference to time we don't know that months have passed. Also troubling is that Seizo Fukumoto as the aging actor says very little. Yes he gives a great performance  but he says very little, which would be fine except the writer and director decided to fill in his lack of talking by having lots of other characters explain whats happening.

Still the film has moments that transcend all the flaws. The final fifteen minutes are amazing, as are several other sequences. There is some truly great stuff here, but there is some average TV movie stuff as well.

By no means a bad film, its an almost great film that you'll wish were better because the good parts are just so damn great.

And because everything ran late I left before the Q&A.  Its a work night and because of the way trains run on Sunday nights I'd be getting home at the time this posted if I stayed.

NYAFF is now done for me. However Japan Cuts goes on.Look for reviews to pop up until it ends.

And now if you don't mind I have the day job tomorrow.